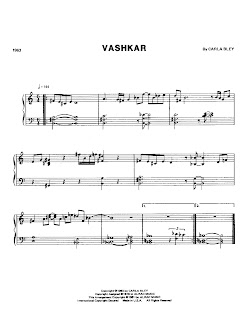 The other day I listed some often-played tunes that had some kind of an mystique, at least in my mind. Here's a tune that nobody ever plays, with a lot of mystique. Apropos of nothing— I've just been thinking about it a lot.

Vashkar is a rather impenetrable, hardcore, short little tune— almost a miniature— written by Carla Bley. It has been recorded several times by Paul Bley, and Gary Burton, and Tony Williams Lifetime.

It's like an 8 bar blues written on a gas planet, with a Giant Steps-like air of pitilessness about it. It's not designed to be easy to play on the drums, and it's not amenable to just playing it and getting it by vibe. But it's also weirdly attractive, and seems readable enough to make you want to learn it. Then when someone calls it sometime in the next 15 years, you can be the hard case who insists that you follow the form and make the hits on the solos.

It's not hard to whack out the notes. It is hard to just follow your nose and end up with a good performance. It doesn't develop in a normal way, or give you any room to do normal drummer things like fill, set up figures, or establish a groove.

Above is the lead sheet from Carla Bley's site. The best known chart is found in the original Real Book.

It's eight bars long— six bars of melody plus two bars of space. The opening theme is repeated in bar 5, sometimes with a subito mp dynamic change. Usually no repeat on the head in. Meter is 6/4, phrased as 4+2/4, but there's never a strong feel of being in 6. Often the 2 side is anticipated, so several measures are phrased like this:

In the fourth measure there's the hit on 2, which makes it feel like there's an odd measure. It actually makes the whole last half of the tune feel random.

The Gary Burton and Steve Swallow version on Hotel Hello is best known. On that arrangement the main punches are hit without any kind of set up, which emphasizes that random feeling. The live version below, with Bob Moses on drums, follows that same arrangement, maintaining the form and rhythmic structure during the solos. Bob doesn't set anything up on the head in, either.

Here are some different recordings of it, starting with Hotel Hello:

So, the Burton version is the hard one, where you have to actually know the tune, and be able to blow over form while catching the rhythmic stuff. It's easier when the solos are free— you can read/fake your way through the head and then just wing it. Most of the other recordings do that.

On Paul Bley's record with Pat Metheny, and Jaco Pastorious, Bruce Ditmas plays it in a more aggressive fusion-era way, which is great. In this arrangement there are some added kicks in the last two bars. The other version with Ditmas is basically completely free.

The version from Paul Bley's Footloose has the tune with a normal light rhythm section accompaniment, and more open solos. Pete La Roca is on drums, and maintains the 6 feel throughout. I imagine a lot of people give it this kind of Ida Lupino-like treatment.

The Tony Williams version uses a different arrangement to feature the drums, and him slaughtering the universe on it is part of what gives the tune its aura. He plays it faster than usual, and the melodic phrases are spaced out. Cindy Blackman's version is kind of strange— it's like a tribute rendition.

Hopefully, the tune eventually begins to feel like a long, strange vamp or repeating A section. You learn to follow its little moves, and gradually you're able to get through the tune without stepping on the other parts, and maybe actually make a creative contribution, and take it somewhere interesting on the solos.
Todd Bishop at 2:21 PM
Share