Here is Mel Lewis trading fours on Stoppin' at the Savoy, from Bob Brookmeyer's album The Blues Hot and Cold. These are pretty interesting. Lewis isn't anybody's idea of a chops guy, but he's not dumb. The fours begin at 3:49 in the track. 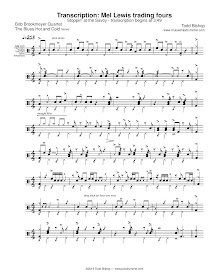 There are a couple of funny items— at one point he's throwing a stick down on the floor tom, hitting the rims. The part on the sixth line with the ruff right before the stick shot will take a little practice. Play this by itself, a lot, and work it up to speed:

It's a natural motion; you have to get the left stick onto the head to make the stick shot, so you just press it into the head on that note. We're not going for a quality buzz stroke there. I have a feeling Mel didn't practice it, but just played it on the job a few tens of thousands times.