Jack Dejohnette plays Tennessee Waltz! One of the most cursed tunes in the standard repertoire. I don't know what's going through his head here— maybe he's having a wonderful time. I know a couple of guys who will confidently tell you what Jack Dejohnette or anybody else is feeling based on what he's playing. I find that annoying, so let's leave it at this: for me it would be a bit of a struggle making a jazz performance out of this tune. There are a lot of funny tunes on Sonny Rollins's records. This is from Falling In Love With Jazz— made in 1989, which certainly has to be the low ebb for that tune as far as jazz musicians are concerned. 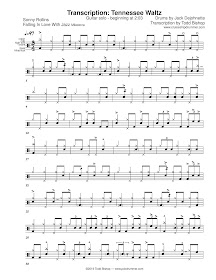 There's a good amount of variation in the dynamics on the ride cymbal— quite a few accents with the shoulder of the stick. To me, that's a modern, post-Tony thing— I feel like I don't hear as much of that with drummers in the 50s. I notice at the end of phrases he'll accent before the 1, but still play the 1 with the bass drum. Not a lot of independence happening here; usually he's playing one foot or the other. There are a couple of standard Dejohnette licks near the end— similar to what he plays in this very old John Scofield transcription.