Here's a drum intro... hey, this could go in my Book of Intros, which HAHAHAHA is still languishing a few hours of work away from completion... a drum intro, played by Art Blakey on The Egyptian, from the Jazz Messengers album Indestructible. I was checking this out for the cymbal sound; he's using a rather famous 20" K. Zildjian ride that he also plays on The Big Beat. But what he's playing is a little Art Blakey microcosm— it includes several little stylistic things he does quite often. 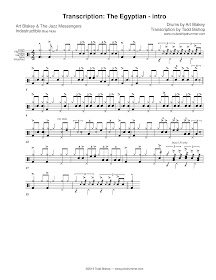 Some of these things don't resolve exactly the way they look in the transcription. In bars 13-14, what Blakey plays is actually somewhere between these two things. There's also a second cymbal note at the end, right before the following downbeat, which I didn't even try to include.

Something similar happens in bars 19-20— six notes seemingly evenly-spaced notes, like in the first example, except he starts it on the & of 4, like in the second example:

I actually think he plays it the second way, and that my ears were just fooled into hearing the fill as six evenly spaced notes— he does play the extra space as in the second way.