UPDATE: Here are some additional notes on practicing this.

For some time I've been trying to work out a way to practice the very difficult “harmonic” coordination section of Dahlgren & Fine's 4-Way Coordination without feeling driven to murder somebody and trash my office. That's what those half-baked harmonic coordination whatsis posts were all about.

Problem: The materials are hard, and they are presented in a way that is utterly pitiless, unconscionable. Otherwise the book is lovely. But the authors essentially make you play one stick control pattern with your hands while playing a different one with your feet. That's what it is. It's presented according to a mathematical logic, and they didn't try very hard to soften the learning curve, or make it look anything like musical reality. And it's notated on a staff system they made up. It's a giant nightmare.

It took me years of brutally hacking through it to make some sense of it, and devise a method that actually starts easy and gets harder, and that relates to the way the drums are actually played.

The answer is, you have to orchestrate it: play a cymbal in unison with the bass drum, and play the snare drum in unison with the hihat. You move your hands between the cymbals and snare drum, according to which foot they're in unison with. Obviously the parts of the feet are set, since they're on pedals attached to one instrument. Doing this orchestration seemingly makes the system more difficult, but it gives it a raison d'etre, a drummer logic. To me it's harder to play things that make no drumistic sense, because they don't sound like anything, and you can't use your ears to tell if you're doing it right.


So, these exercises: This is a set of warm-ups for a larger system— or, for most people, this could be the entire system. For the real nutjobs we will go on to create an actual Reed-based method. Here are various basic cym+bass / snare+hihat combinations, with which you use some different stickings to play the cymbal and snare. 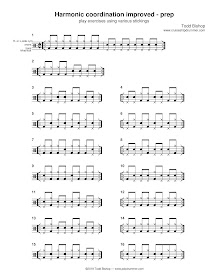 When playing the cymbals, use the closest cymbal for that hand. There are four sets of stickings to play through. Practice one set at a time, moving onto the next one when you can play them at a reasonable speed, say around half note = 50-60 bpm. The first set is easy; normal stickings used by all drummers, for basic familiarity with the practice patterns. The second set introduces some independent moves. The third and especially fourth sets will take some practice.

The end result is that you will have more flexibility in playing normal stuff. You may find yourself moving around the instrument in new ways; your musical impulses may resolve themselves in in unexpected ways. Mainly this will influence your funk, ECM-type jazz, and Latin playing. Complicated Cuban-style independence will get easier to learn.

Postscript: More about the logic of that orchestration system— cym+bass, snare+hihat. Cymbal and bass drum playing a rhythm in unison is a normal part of drumming. So is filling in between those notes with the snare drum. The odd element is the hihat in unison with the snare drum; there's no normal musical effect associated with that— and it'll help you do those funk “barks” with the hihat. There's one. Doing the system this way wasn't my idea; it's Dahlgren and Fine's. I'm just telling you how their thing works in practice. There are creative possibilities with it which you'll discover through playing it.
Todd Bishop at 12:26 PM
Share