This is something I was working through with a student recently: filling during a Mozambique groove. Latin grooves need to be worked out more than other things, so it's a good idea to break it down substantially, so you can get back to the groove after the fill. Start by practicing these mostly non-repeating: play them one time, stop, and play them again. I've put all of the fills on the high tom tom in these examples; you can move them around however you like, vary the accents, play rim shots, embellish with flams or ruffs, use whatever sticking you like.

Here's the basic groove— for hands only. Learn to play it, if you haven't already:

First, practice starting the groove on 2:

Then build a simple fill with alternating 8th notes, starting with two rights. Practice each of the following phrases repeating, then add two measures of the groove at the beginning, making a four measure phrase with the fill at the end. Note that the first four notes of the fill have the same rhythm and sticking as the second measure of the groove pattern: RRLR. 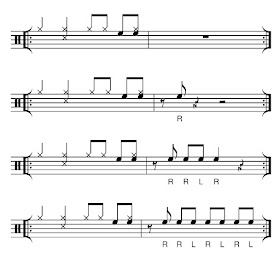 Then grab some rhythms from the book Syncopation, and play them as a lead-in to the groove pattern, accenting the last note of the syncopation rhythm— if possible with a cymbal in unison. If the fill ends with running 8th notes, just end it with a rim shot. Then come in with the groove on beat 2:

Then play some syncopation rhythms as a fill, with the complete context. Use rhythms that start with an 8th rest, and start the fill with your right hand. So these fills all start the same way as the previous one. Play the first measure of the groove, break on the & of 4, play the fill, accenting the last note as above, and come back in with the groove on beat 2:

I suggest practicing these last two things non-repeating; stop after a couple of measures of the groove at the end, and restart. You can easily use this same structure to practice hitting a bass drum/cymbal accent on beat 1 after the fill, which isn't that hip, but you will do it a lot.
Todd Bishop at 6:24 AM
Share