This might be more of an item for teachers. This is a sketch of a method I've found to be effective for teaching younger students to play fills, and play them in time, with both hands at an even volume. I teach this verbally, and by demonstrating it. The hand motion is virtually the same for the hands-in-unison version and 16th note version of each exercise; the left hand just falls later on the 16th note version. 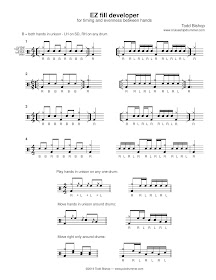 •  On all of the exercises, the right hand does not change speed— it plays 8th notes throughout. As a warmup, some students might have play the hands-in-unison exercises with the right hand only.
• Exercises are written in 4/4, but most often I count Ex. 1 in 2/4, and Ex. 2 in 3/8. I try to minimize the counting element with this lesson.
•  When both hands are played on the same drum, flam them a little bit— rock & roll-style, with both hands at the same volume. Make sure the right hand falls first.
•  Start with three different basic ways of moving around the drums: both hands on one drum; LH on snare, RH moving; both hands moving, to the same drum. Both hands can also move to different drums independently, but it's best to do the other ways first.
•  Line 2 is really preparation for line 3, which is a common rock figure. Unless the student is already playing 6/8 or triplet feels on the drum set, there's no reason to turn this into a lesson on playing in 6/8.
• Line 4 is meant to be played non-repeating.