For awhile I was campaigning to get this RLLRRL sticking called “Swiss sixtuplets”, based on an overheard conversation from drum corps days, when George Tuthill and Alan Kristensen, two corps legends, were talking about rudiments. George was my corps director and Alan was the drum line instructor. George mentioned that Swiss rudimental drummers routinely played sixtuplets this way, instead of as singles. I haven't found any evidence of that being the case, but I wanted to try to force a piece of my personal lore into the drumming literature anyway.

Whatever: this is a companion for the recent Three Camps in paradiddle-diddles; taken together they're an opportunity to really smoke your major sixtuplet stickings. You should be able to do these fast. 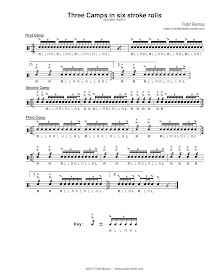 Normally when playing this rudiment I accent both of the singles— the R at the beginning and the L at the end; doing that here messes with the integrity of the piece. Accent that trailing L lightly, if you must.