I was practicing this POC from last year, and wanted a version of it in 9/8, and here it is. I called it “African” only for the middle of the triplet rhythm on the hihat, and that bass drum double in the middle of the measure. Somehow those are broadly African-seeming choices to me. They don't reference any particular rhythm. I'm aware of no folkloric version of this “Afro 9/8” groove either, but in modern music people adapt traditional styles into non-traditional meters.

Hey, remember that last post where I said you can throw away Dahlgren & Fine? This is the kind of thing you can throw it away for: things that are based on real music, that sound like something when you're done with them. This page is probably a bigger coordination challenge than most players ever attempt, so why not just do this? It's way more rewarding. 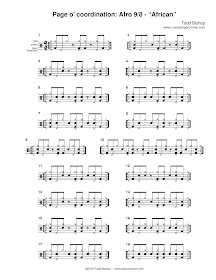 Practice this the same as all of the other POCs: learn the patterns— I usually start with the left hand as a rim click on the snare drum— then drill the entire page using a series of stock tom moves.