From the Miles Davis album Quiet Nights, with conducted and arranged by Gil Evans. The tune is a Miles/Gil classic, and appears as a bonus track on the 1997 reissue of this album. The version I know the best is on The Individualism of Gil Evans. The transcription is of Tony Williams playing the slow section of the tune starting at 6:28. This was recorded in October 1963, a couple of months before his 18th birthday.

...I'm not trying to awe you with that statistic, by the way. I don't care about anything being awesome, I just want to see some artistry. However old someone is, and how ahead of the time or behind the time, the product is the product. What we have here is a nice intelligent creative performance, that is still very modern. You could say it's an impressionistic interpretation of blues accompaniment. 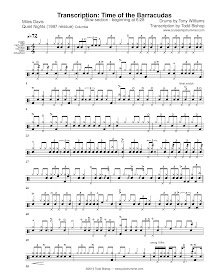 Tempo is 72 bpm. 8th notes are swung with a triplet feel; there are a couple of spots where I wrote a dotted 8th-16th rhythm, where he disrupts that consistent triplet feel a bit. There is also a double-dotted 8th-32nd rhythm, where he plays a big accent right before the downbeat. He plays a little bit of double time, also with a swing feel— swing the 16th notes where indicated. Approximately like 16th note triplets with the middle note left out.

Dynamics are very subtle throughout. Indicated accents are generally light; housetop accents are rim shots, but not played extremely loud. The hands are played in unison a lot of the time, with a lot of left foot activity. I believe there's more hihat played on the 2 and 4 than I put in the transcription— he plays it very softly at times, and I can only hear it sporadically. I'm probably missing a little of the bass drum, too. There is also a lot of mixed triplet activity, and you often hear a quarter note triplet rhythm on the cymbal (always starting on beat 1 or 3)— either alternating with the left foot, or with the left hand playing 8th note triplets.

This is a long piece, and there are cool sections in 3 and 4 which I'll try to get to transcribing soon.