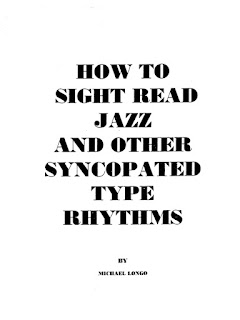 There's a good book on rhythm that is kicking around on the internet for you to download and read: How to Read Jazz and Other Syncopated Type Rhythms.  It's by Micheal Longo, who had a long relationship with Dizzy Gillespie as his pianist and musical director. I learned about the book from a Hal Galper video. I had never read it, but in it he discusses some things I've been talking about on the site for a long time, and there's a lot that is relevant to drummers.

It is described as a course in sight reading jazz rhythm:

The purpose of this course is to provide you with a technique for training your instincts to respond to the type of rhythms which appear in jazz, rock, Latin, or any other of the syncopated styles of music that originated in the United States.


Students of jazz generally have trouble with reading due to the fact that they were taught rhythm in terms of European music, and jazz rhythm has an African basis.

It goes into the additive rhythmic concept, in which syncopated rhythms are conceived as all downbeats. So this simple “Charleston” rhythm, which breaks down like this:

This is precisely the way composer Bela Bartok achieves the accentuation of Hungarian gypsy music in his compositions. Much of the world's folk music, or music of the people, seems to accentuate the off-beat consistently. Bela Bartok uses an asymmetrical metric scheme similar to the concept expressed in example 47.


This is the underlying concept for his reading method, and whether you learn the method or not, it's an enlightening alternative way of thinking about rhythm.

Longo gives some interesting notes on the cymbal rhythm, which relates to some of the “skiplet” talk on this site. He told about Oscar Peterson singing the jazz cymbal rhythm like this:

It is of extreme importance to notice that in both the Peterson and Gillespie examples the phrasing of the cymbal beat begin in the bar before the downbeat bar.

This produces an entirely different “feel” than the common interpretation beginning on the first beat of bar one and should be considered as an important conceptual distinction.


We saw this before with Art Taylor, who started on beat 4 when demonstrating his cymbal rhythm. I based a whole system for learning jazz independence on it, with my “skiplet” method, based on a single repetition of the cymbal rhythm, starting on 2 (or 4).

He goes on to illustrate a thing with jazz rhythm where notes on the &s are conceptually linked to the following beat, not the beat before. So instead of feeling 8th notes as:


You would feel them:

Which has been a very useful idea for me— attaching &s (or as, with 16th note rhythms) to the beat after.

Longo's actual reading method is rather strange to me— he puts the actual beat numbers (from the beat after the note) on the &s... I haven't had enough time to digest it. I don't feel it's strictly necessary, since we are all practicing out of Ted Reed's book every day, so we're more naturally fluent with these types of rhythms than other instrumentalists.

Anyway, it's a concise little volume that is nevertheless full of things to think about— there's also a section on polyrhythms I haven't fully processed. Get it here.
Todd Bishop at 10:13 AM
Share