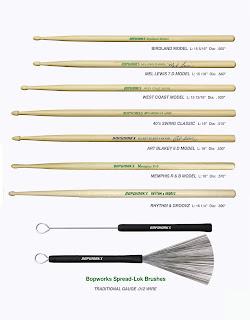 Related to my Jazz stick round up from January: I got to try out the product line of Bopworks Drumsticks, a small company in Austin, Texas, making sticks for jazz drummers:

Bopworks Drumsticks was formed to create genuine, faithful replications of the designs that produced a sound and feel not possible with those found in the modern market. Our sticks are custom made in the USA from American Hickory with vintage machinery similar to that used to make the original drumsticks in the 50's - 70's.


Making historically-accurate light hickory sticks for jazz is their stated mission, with designs either direct copies or close facsimiles of some well known players' signature models. Most of their sticks range in size from a small 7A to a large 5A... roughly the size of a Vic Firth SD-4 Combo or smaller.

WERE ALL THE OLD DRUMSTICKS THAT SMALL?

Actually, yes, most of them were that small… although, the street/marching sticks were very similar to what’s out there today, both in thickness and length, going up to 17”or so. The orchestra or dance models, however, were generally less than 16” in length with a proportionate diameter. Models like the Krupa, Rich, and Belson models clocked in at 16” or close to it.

Remember, sticks could be made in any size or length regardless of the decade, so it’s not like these guys had to use light sticks.

Before getting into the reviews: Chris at Bopworks was nice enough to send some extra sticks, which I will send out to you all. If you want some free sticks, follow the site (in the sidebar, scroll down), and send me an email with your mailing address. I'll select names at random to receive sticks. US and Canada only, sorry.

Birdland Model - 15 5/16" .500 - snap crackle
This is a signature stick from the 60s— Bopworks doesn't identify the artist by name, but let's just say it's the Snap Crackle stick. These are the smallest sticks I've ever played; a thin 7A, long taper, slender oval bead. It is not a stick for digging in— I find them to be unforgiving of any tension in my grip. You really have to dance with these sticks, and respect their limitation power-wise.

They are very interesting for their responsiveness to dynamics, especially subito changes in dynamics. They create so little vibration in the instrument that they are very limber in going from loud to soft. They are also interesting for the way they help you blend with the rest of the ensemble— normally drums tend to dominate the piano and bass, and the Birdlands really bring you down to their level, so you're much more co-equal with them volume-wise. They are also good sticks if you happen to have a lot of thin, live, difficult-to-control cymbals.


Mel Lewis 7D - 15 1/8" .540 - short / full
I associate Mel Lewis with good cymbal sounds and deep tom tom sounds, and that's what these give you: big sound out of the drums, and full, pleasing sound out of the cymbals. Very agreeable stick if you're playing a lot of drums.

Good if you like a tight set up, with everything close. They're relatively short, balanced toward the bead, so they feel rather stubby. The Birdlands are only slightly longer, but do not feel that way. My hands automatically seek a balance point, and I often find myself holding them very close to the ends. I like these sticks a lot, but would probably like them to be slightly longer.


West Coast Model - 15 13/16 .520 - general purpose runner up
Excellent general purpose combo stick. Design is similar to the Birdland, scaled up— though it is still a light stick, roughly in the 7A category. Shorter taper, and balanced more toward the bead end, which I noticed more in testing the sticks than actually playing with them. Slightly mellower cymbal sound, and lighter sound overall compared to the Swing Classic.


40s Swing Classic - 16" .515 - general purpose winner
Signature model of a very famous drummer of the big band era— apparently Bopworks does not have legal clearance to identify him by name, but his initials may be GK. Small arrowhead bead, short taper. Great all-purpose stick, well-balanced, with a nice attack on the ride cymbal. After playing the Birdland and Mel Lewis sticks a lot, these feel quite long, and slender. This is may be my favorite stick of the lot, with the West Coast Model a close second.


Art Blakey 8D - 16" .530 - aggressive cymbal sound
Feels like a slim 5A, with a very robust acorn/arrowhead tip. Weighted to the bead end. Biggest cymbal sound of all the sticks. These are made for a big, aggressive Blakey-like sound. I don't want to overstate it; these are not extremely different from the Swing Classic, but they just seem to want to move long distances and make a lot of sound. I did not get to test these in a large ensemble setting, but they seem like they would be great sticks for big band.


Memphis R&B - 16" .570 - big stick / light sound
About the size of a 5A, with a surprisingly delicate, musical cymbal sound— a lot of highs and not a lot of body. It's a “refined” sound not unlike a Vic Firth AJ6, which is a normal stick that is extremely thin at the bead end. The Memphis is not as extreme as that, but it's a similar vibe. The pair I got seems to be made from very light wood, so although it's bigger than the Blakey model, it feels more limber, and gets a lighter sound. I don't know if the choice of lighter wood for these sticks is deliberate. These compared very well with the other sticks in a normal combo setting, despite being significantly larger— they got a bigger sound from the drums, and a nice controlled cymbal sound.


Rhythm & Groovz - 16 1/4" .590 - mellow heavy
Fat in the grip area, very long taper, smallish flattened acorn bead. About the size of a 5B at the butt. Not unlike the Vic Firth AJ12, but larger— the AJ12 also has an extreme taper. Rhythm & Groovz actually get a slightly mellower sound, with less highs in the attack. Very subtle stick on the cymbals, for having such a fat shaft. Seems a great stick for situations where some real power is called for, but also a nice cymbal sound.

I have been using maple sticks for many years, but have become increasingly dissatisfied with them for drumset; they get a nice musical sound, but I feel I need something a little brighter on the cymbals. I tend to associate hickory with a hard, crude, “thuddy” sound— a feeling carried over my experience with Vic Firth American Classics, which I have used from time to time. That is not the case with these sticks; they are slimmer, and designed for a good cymbal sound— brighter than maple, with better projection, but still a musical sound. It is probably an ideal cymbal sound, since we are looking to be heard in an ensemble of players, in environments with varying degrees of background noise.

These are all excellent sticks, no actual dogs. Quality is excellent; sticks are well balanced, and made out of good wood— no detectable warpage or weird sounds/stick response that come from cheap, indiscriminately-selected wood. They do not appear to be matched for pitch, which is not a concern for me— I only need that in a concert snare drum stick. They are closely matched for weight, which is important to me. The closest thing to a design flaw I can find with any of them is the shortness of the Mel Lewis stick. But it's Mel's stick the way he wanted it, so...

For a general purpose combo stick, the most solid choices are West Coast and Swing Classic. Swing Classic has a stronger attack, with more highs. West Coast feels distinctly lighter (it isn't actually, so ???) with a mellower attack on the cymbal. The other models are all a little more particular, satisfying a more specialized need or taste. All the sticks work well in a combo setting, except Rhythm & Groovz, which are more suited to amplified music.

I definitely recommend trying out, and coming to terms with, the Birdland model, both for how they affect your blend with the ensemble, and to learn the touch required to use them effectively.

I compared these sticks with Vic Firth American Classic 7As and SD-4 Combos. The Combos are a very popular jazz stick, and the 7As are a conventional equivalent to the WC/SC/AB models. The 7As produced a very aggressive attack not unlike the Art Blakey model. The Blakey had a clearer attack, and the VF sounds relatively crude. The Combos produced a similar sound to the Swing Classic, but darker (Combos are made of maple), and with a mediocre attack.

See the jazz stick round up for more stick reviews and comments.
Todd Bishop at 12:01 PM
Share