A few thoughts and observations relating to a Mike Clark / Donald Harrison gig and clinic in Portland on Sunday and Monday:

First: It continues to impress me that everybody knows that same stuff. Whether it's Mike Clark, or John Riley recently, or any of 50 or so excellent professional drummers I know in Portland and Seattle, or me, it's all the same information. People with long careers playing with famous players will have better stories, professional educators and clinicians will have a worked out presentation, someone like me will have spent time learning to write about it and express it. And individuals will have their own emphases, and pet theories. But it's all the same stuff. There's always an instant recognition that somebody is telling you something you knew, or that you didn't know you knew. 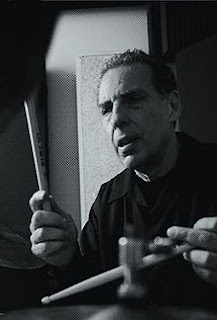 Mike Clark is best known for playing with Herbie Hancock's funk/fusion group Headhunters in the 70s, most famously on the album Thrust, but he clearly considers himself to be a jazz drummer— a modern player in the post-Tony Williams, Elvin Jones mode. The band did a funk tune on Sunday, but you got the feeling it was for the audience. He said of his funk playing in the 70s that he just learned the style to keep up with the times so he could keep working.

He played fairly forcefully, really digging into the ride cymbal— there is a different kind of groove happening with these older players, who did a lot of funk/R&B gigs. They dig in more, and play with a whole lot of bottom, even when they're not playing anything different. Clark didn't necessarily use more bass drum than normal, definitely didn't feather the thing, but his overall sound was coming from deep in the instrument. Even as he was playing pretty strongly, you could still hear the unmiked bass and upright piano— of course they were expert players who are able to make themselves heard.

...I like to think I play that way, but I have probably moderated my touch to adapt to the prevailing Pacific Northwest thing of playing very softly. I try to get that kind of intensity at a low volume, but was also disappointed when the guitarist John Stowell once told me to play “More New York, less Portland.”

Incidentally, I use a lot of the same licks as him— much of the dense stuff I do here is from the same post-Elvin bag as Clark's stuff. A lot of it is standard vocabulary if you worked through Syncopation the normal ways, some of it I can't recall having deliberately worked out. Most of it easy stuff to do fast.

In the clinic Clark remarked that he sacrifices a lot of his chops in favor of playing directly in the moment— he plays instinctively, and does not try to put his worked-out stuff into the performance.

Solos would be long, with consistent energy. Sort of a Chasin' The Trane vibe. Dynamics tended to be fairly static over the course of a solo— at least relative to the current introspective thing, where dynamics are a primary featured element, and it takes a long time to build up to actually hitting the instrument. Overall it was less climax-oriented than is common now, though there was some of that. I see that climax-seeking way of playing as a crowd-pleasing thing— virtually a device.

Since I think a lot about cymbals now: He used Istanbul Agop cymbals, 22/20/14, I'm not sure what line. They looked similar to Turk and 30th Anniversary series. Very dark and dry. My usual complaint about that type of cymbal was borne out at the gig: they sound great from the playing position, but they're rather insubstantial out in the room. Maybe that's what enables him to play strongly without being overbearing, but you do sacrifice on sound, and to some extent, energy. 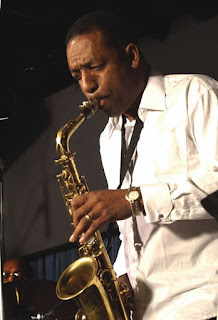 Quotes that jumped out at me, from Clark, and from Donald Harrison:


“Swinging is an addiction.”


That's an idea that comes up when you speak to Brazilians about samba: “like a drug.” They are talking about groove— an infectious, consistent (though not without push and pull), unrelenting pulse. It's a very different thing from what younger musicians think is groove today— either as an arena for displaying your abilities, or as an optional thing that you have to actually be cool to get. You don't have to be cool to understand samba.

“Music is always about vibe. Always.”


Some students played a bossa nova, the same way people always play bossas: routinely. Harrison started his critique with a very immersive story about being on the beach in Rio with a woman, and ended with that line.

Harrison was a very interesting guy, very knowledgeable, and a charismatic personality— a very relaxed, quiet and slow speaker. It was sort of like listening to Monk speak, except that speaking was maybe not Monk's bag, and it is definitely Harrison's. An extremely captivating personality.

One thing he remarked on was call and response in bebop. Usually that idea is illustrated very literally as players repeating each other's motifs; Harrison was talking more about filling in the gaps in a bop line— either a tune or a solo. I've never studied this specifically— I've noticed it more in Brazilian music than in jazz. I'll be looking into it.
Todd Bishop at 10:00 AM
Share