You go through stages of learning jazz repertoire. In high school I would play Charlie Parker tunes on the snare drum— just the melody rhythm. Then I learned about some standard forms, like 12-bar blues and I Got Rhythm, and common tunes with a built in arrangement, like A Night In Tunisia, Airegin, or Stolen Moments. When I was playing the river boat gig for which this blog is named, we went through a lot of of old material, which I would learn by performing it, often without hearing the titles. Along the way you encounter some tunes with unusual forms, like Moment's Notice, Stablemates, Sea Journey, Gloria's Step— everybody listens to the records they're on, and knows about them, and just learns them.

Through that process, you develop expectations of what normal tunes are, and you learn how to play effectively on them, whether you have played them before or not.

As players with advanced degrees become more commonplace, you get asked to play more unfamiliar weird tunes. Those players seek out more challenging material, and they write their own hard stuff. You get more hard tunes, with less time to learn them, and you spend more time being lost, and generally feeling unable to play anything that makes sense.

Look at Radio by Steve Swallow. A good tune, mildly weird— this and a lot of other great charts are available free at Swallow's web site. Give this a quick scan, and follow along with the recording below: 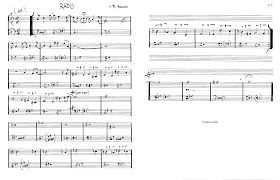 It's a through-composed (meaning nothing repeats) 27 bar tune, in 3-4-6-8-6 bar phrases. The coda happens at the end of the tune only. Listen to the head in, and the head out starting at 3:38. Roy Haynes is the drummer.

It's not illogical as a melody, but it has a funny arc; it doesn't develop the way you might expect, phrase lengths are odd, and it's not obvious how to play it effectively on the drums. You can hear that much of what Roy does is outline the melody. He accents the 1 quite often. He plays a big accent on the B7 in bar 7, and on the B9 in bar 19; in bar 20 there's an ensemble accent on 2 that is not in the chart. He improvises more on the head out. We don't get the big rewards from his playing that we get from Matrix or Played Twice. Maybe he could have played it better, or maybe that's just not what this tune is for.


Anyway, here are some suggestions for dealing with these increasingly common reading situations:


Listen
Most of reading is actually listening. Some good hard-to-read tunes become much easier if you just listen and follow your ears. More on that in a moment...


Play time
You are not obligated to play a lot of stuff on the drums. And doing something on the drums is not necessarily the solution to every problem with a composition or arrangement. Of course, part of the problem with some weird tunes is that it's hard to settle on a good time feel for them. You can always play quarter notes.


Play the written notes
Some of these things are seemingly written just as series of events, not necessarily meant to form a coherent whole designed for maximum emotional impact. To an extent they are made coherent by the fact that somebody put them together in the same tune. Give up on trying to see the bigger picture (for now), and just hit the written notes by playing them more or less exactly. If you play the thing more than once, you'll begin to get some ideas about how to contribute— making a dynamic shape, seeing which things you should be hitting, where you can fill, and where you can just play time or texture.


“Play the riff” writ large
Old school advice for playing odd meters goes: play the riff. Meaning you just listen to the rhythm part and play along with it, without necessarily understanding it. Some of these tunes can be approached the same way; through listening and some repetition the melody begins to stick with you, and you can just follow your ears through all the weird changes, even if you don't actually know what you're doing. Best with tunes without a lot of ambiguity, repetition, or sequences (repeating transposed melodic motifs). For example, Jogral is a busy but singable Brazilian tune with 15 bar A sections, that is easy to approach this way.


Count measures
Look at the chart, figure out how many measures per phrase, and count your way through. This is the worst thing in the world, which I do only as a last resort, when I can make no musical sense out of what I am reading. Frankly I'd rather just be lost. The necessity of doing this suggests a directionless, pointless tune.


Throughout this process you do have to sacrifice a feeling of completion, and of playing effectively— there will be incomplete phrases, abrupt changes you don't have time to set up, and soft changes where you can't tell where the new phrase begins, or where the top of the form is unclear. To an extent you have to make the notes and give up playing for effect— at least until you actually learn the tune, and figure out what it is trying to be.
Todd Bishop at 12:16 PM
Share