I think of Connie Kay as the quintessential background player, so I'm always interested to hear him actually do something— like play a solo, or some more assertive comping. Here he trades some 8s and 4s on Three Little Words, an uptempo tune from the John Coltrane/Milt Jackson album Bags & Trane.

Tempo is quarter note = 250— roughly what is called “medium up”, and about as fast as most people ever play. It's notable that he never hits the tom toms— he barely comes off of the ride cymbal for most of it— and uses the hihat only part of the time. He does feather the bass drum much of the time, but I haven't attempted to notate it.

The transcription is of the drum solo breaks only, and begins at 5:50 in the recording: 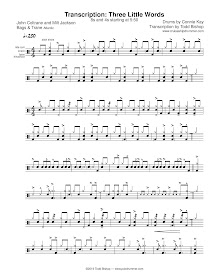 Swing the 8th notes. I have written a lot of accents, but they are mostly pretty subtle; his actual dynamics are fairly even. Use a mixed sticking on the triplets— a double on the first two notes of each triplet.