Another example of rub-a-dub applied, using a passage from the Charles Mingus tune Fables of Faubus. In previous lessons we've just used this idea on the head of some tunes as an exercise. Here we're using rub-a-dub for its actual purpose: setting up, playing, and filling in between arranged ensemble figures. When you play Fables of Faubus, you could actually play this part of the tune this way... if you choose, after having duly listened to the way Dannie Richmond plays it on Mingus's recorded versions.

Which... by the way: if you do play Fables, and are reading it out of the Real Book, that chart has this figure notated incorrectly. It puts the hit on 3 in the third measure on the & of 2— it's written as 1&-&. That's wrong. Make the band get their pencils out and change it to what is written here. 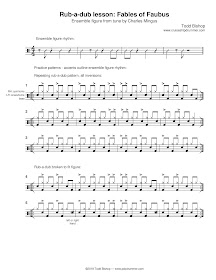 Practice each line individually, repeating several times at least— the figure doesn't repeat on the actual tune though, remember. The accents just indicate the rhythm of the figure; you don't necessarily have to accent all of those notes on the drums. I've given the running rub-a-dub lick in all its inversions, and a couple of lines with the lick modified to better fit the figure. As always, this is written in the initial orchestration, with the right and on the cymbal, and left hand on the snare drum. As you learn it you can move the left hand around the drums, and move the right hand note with no bass drum to the toms or snare.

Here, I've made a loop which with which you can practice this: