Page o' coordination: that with interruptions

A rare opportunity to do a POC in 4, with lightning turnaround, no less. I attended a clinic by John Riley and Terrell Stafford in Portland this afternoon, and they were each telling what they practice. This was something Riley said he had been practicing as a core drumming idea for basically 50 years, continuously. He played pattern number 1 on the page, and said, “That, with interruptions” and demonstrated some variations on it.

So let's learn John Riley's C major scale. I've written up all the possible variations on it, plus one multimeasure idea, because I had some extra room at the bottom of the page. I believe he played a triplet version of the same SSBB pattern, which will have to go on another page. 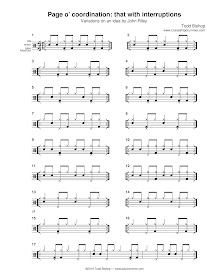 Obviously the context here is jazz, so swing the 8th notes at slow to medium up tempos, and play them straight at very fast tempos. Do the stock tom moves (also something I began doing in part from using Riley's books) with the left hand in whatever way is reasonable for the tempo.

By the way: John Riley, a right handed drummer, writes with his left hand.