One thing my German friends made me realize is that I use really big friggin' sticks. For many years I've used one stick: the Vic Firth SD-11 Slammer. It's a maple stick the size of a 5B with a rounded arrow tip. It's big, but since it's made of maple, it's not overpowering. I get a nice, full, round sound with them, and I've still been able to play as quietly* as I've ever needed. Basically, playing a hotel gig once, I realized I could switch from brushes to Slammers with no volume change, and I decided I could just use the one stick.

But a 5B is really big. I felt there are some limitations to using the one fat, light stick— under some conditions, that full round sound can be a detriment. The body of the tone can compete with the attack. They're also rather clumsy for faster playing, especially at lower volume— moving that much mass, I felt they were forcing a certain tension in my technique.

So here are some notes on sticks I've been trying out, taken roughly in order from smallest to largest— but starting with the smallest stick I previously had experience with:

Regal Tip 7A — diameter: 0.52" / length: 15"
I've had a pair of these with nylon tips kicking around for a number of years. They're short and extremely thin. Much smaller than any other stick I have normally used.

I took them out and used them on a gig, and they do make for a very intimate sound on the drums, while still having a cutting attack. Good for guitar/piano/vibes— I'm not sure I'd choose them if there was a strong horn player present. They're an excellent bossa nova stick— it's easy to play the very fast cymbal rhythm, with a very aggressive, edgy high pitched sound out of the snare drum, similar to this.

Bopworks Birdland Model — diameter: 0.5" / length: 15 5/16"
Very interesting experience playing these sticks. They're a quarter of an inch longer, but thinner than the Regal 7A, with an even longer taper, and thin oval bead. They feel extremely delicate— the thinnest, lightest stick I've ever played, in fact— if you are at all prone to digging in (like I am), these may be difficult sticks for you. They don't respond to that kind of touch, and you may break some sticks. You really have to just dance around on the drums for these to work. In the practice room, the sound of the instrument initially seemed thin and insubstantial.

...and then I used them on a gig, and they were fine. I had no problem adjusting my touch for them. There is a definite ceiling as to how loud you can play, but there was a very interesting sensation of responsiveness to dynamics— since the stick isn't instigating a whole lot of vibration in the instrument, dynamic changes can be instantaneous. That was my experience both with the Birdlands and the Regal 7As. By comparison, my Slammers are like a PT boat roaring around, leaving a big wake. The Birdlands/Regal 7As are more like stones skipping across the water.

Bopworks 7D Mel Lewis Model — diameter: 0.54" / length: 15 1/8"
Similar in size to the Regal 7A, but a quarter of an inch longer, with a shorter taper. Weight is somewhat balanced toward the bead end, so they produce a fuller sound. To me they feel rather stubby— I find myself holding them close to the butt. I can see these as being engineered for Mel's low, deep tom sound. I'm still undecided on how useful these will be for me. 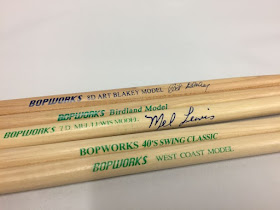 The Bopworks brand, by the way, is very interesting— they are duplicating signature models of sticks from the 40s-60s, with a definite doctrinal perspective that they are the correct sticks to use for jazz. Which... I'm not any kind of originalist; I don't believe in historical correctness for its own sake. A lot has happened in music in the last 50 years, and I'm only interested in what an instrument/implement does for my playing, and how it helps me do my job accompanying other musicians. But everyone listens to the drummers of that period a lot, so it's educational any time we can get close to using the instruments they used. If you take those Birdland sticks on a gig, you realize that oh, those drummers really must have been doing a different thing from what I've been doing. It's a rare thing for any drum stick to give me any kind of musical revelation, and I will be using these a lot.

Vic Firth American Classic 7A — diameter: 0.54" / length: 15 1/2"
Very solid-feeling 7As. Half an inch longer than the Regal, fatter bead, shorter taper, slightly fatter shaft. Chunky compared to the other sticks in this size. VF American Classic hickory sticks generally seem to be stuck in the 80s, when power drumming was the norm. We were all playing medium-heavy cymbals, Pinstripes on the toms, and everything was all about slamming, full, deep sounds. In a way, I never fully got over that, which is part of the reason for me using those larger sticks.

Despite the similarity in size, these sticks are a very different playing experience from the others so far— by an order of magnitude. They're very solid lighter sticks, not so different from what I'm used to, and probably the only stick from the American Classic line I would consider using today.

Vic Firth SD-4 Combo — diameter: 0.545" / length: 15 7/8"
This is what everybody in the Pacific Northwest uses; I used them for a long time, until I switched over to the Slammers. When I gave up the Combos, I felt they were the worst of all worlds— too thin, too short, and too light. I was playing generally pretty loud at the time, and felt I had to work too hard and move my arms too much for the volume. But compared to the other sticks here, they're not at all small; about the size of a 5A, and maybe a quarter of an inch shorter than my Slammers. The tip is basically a cube with a rounded end, and they're made of maple. Definition is fairly weak compared to the other sticks here, which was part of my original complaint about them. That was borne out on the same gig where I played the Birdlands and Regals— I played the Combos for half a tune then put them away. Overall not bad, though, and I will continue to try to find a way to use them. A lot of good players use them and sound great.

Vater Sweet Ride  — diameter: 0.53" / length: 16"
Long hickory 7A with a short taper, and very small round bead. These are really strange. This stick produces a lot of body, and little attack. I don't know the reason for wanting that sound from a cymbal— maybe if it was a heavy, ugly sounding cymbal. It works OK with my 22" Sound Creation Dark Ride. But I think this may be a bad design for jazz drummers playing normal jazz cymbals.

Vic Firth American Jazz AJ6 — diameter: 0.55" / length: 15 1/2"
Weird, short hickory 5A with shaved-down end, small acorn bead. I can see breaking these easily if you're prone to digging into the drums/cymbals. The last two inches of the stick is thinner than all of the other sticks listed here, which give a strange muting effect when played on a cymbal. Maybe a good stick if you have to play with a vocalist, or play very quietly on cymbals are too heavy. A really skilled player could certainly get a very refined, museum-like sound with these... not really my thing.

Vic Firth American Jazz AJ2 — diameter: 0.565" / length: 16"
Hickory 5A with a very long taper, fat smallish acorn bead. Basically a more refined 5A. A companion to the VFAC 7A. Both of them are good alternatives to my Slammers, but being made of hickory, they do get a harder sound. Sometimes in club settings you need the cymbals and drums to cut more, and these would be good for that.

Vic Firth Peter Erskine Ride Stick — diameter: 0.575" / length: 16"
The biggest, heaviest stick here. A big 5A, hickory, with a small tip. This stick is made to give a nice sound when digging in. Weight is emphatically balanced at the bead end, which feels good when you're playing medium tempo full strokes on the cymbal. That's a very 80s feel to me— we used to like sticks weighted at the end, with some “throw.” Today people seem to like sticks more balanced for speed. Seems designed for Erskine's round, musical sound on the cymbals and toms.

These would be a good alternative if you're used to playing relatively big fusion sticks like a 5A, and want a nicer cymbal sound. Or if you're using lighter sticks and want something heavier, but still “musical.”

Vic Firth SD-11 Slammer — diameter: 0.61" / length: 16 1/4"
After playing all of these sticks, my usual sticks feel very big, but they still work for me. I have no problem playing them quietly, but I have noticed that they overwhelm certain thin, very live cymbals. I don't think people should be buying cymbals that demand a certain kind of stick, but that's a subject for a different post.

The Slammer is most similar in playing experience to the Firth AJ2 and 7A; they are all normally balanced, and produce a full range of overtones from a cymbal or drum. The Slammer gets a nicer tone, and the others have more attack— I don't think it's a very pretty attack sound. Kind of a thud with the larger sticks and a thwack with the lighter ones. As I said about the Slammer, in some conditions the body of the sound competes with the attack, and definition can suffer.


We'll be seeing more of these jazz stick roundups soon— I'll be trying out some more Bopworks sticks, as well as those by a Louisiana company called La BackBeat. I'd be happy to hear anyone's recommendations or favorite sticks in the comments.


* - Quieter, in fact. There is such a thing as playing too soft. Any time you perform, there's a band vs. room noise signal-to-noise ratio in effect— if the music is intended to be heard, you can't be so quiet that every little sound in the room is competing with you.
Todd Bishop at 10:43 AM
Share