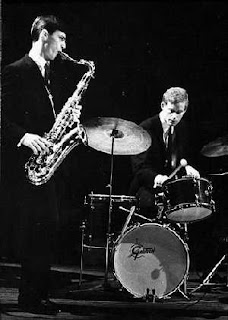 From Jon Christensen's Modern Drummer feature in the early 80s:

MD: What makes a drummer interesting to you? What do you look for?

JC: Having watched a lot of drummers over the years, you can tell that some of them play very correctly and that they are schooled drummers. But in some instances, that seems to have resulted in a stiff and not very interesting feel, at least in my opinion. I have always been more influenced by drummers with a more naive, spontaneous way of playing. You might even call it an amateurish way of hitting the drums, as opposed to all the drummers who play correctly.

If you look at Jack DeJohnette, who definitely knows his rudiments inside out, he has been able to incorporate all that knowledge—you might even say camouflage it so that his playing still sounds fresh. With some other players, it is too obvious that they are playing things they already know—things they have been practicing.
Todd Bishop at 7:41 AM
Share