Biggest longest transcription we've done here in some time. This is Jack Dejohnette playing on Timeless, another essential recording by John Abercrombie. Jan Hammer also appears. I got my copy of this album at Rasputin's Records in Berkeley, California in 1988. Where did you get yours? Our relationships with recordings are supposed to be significant enough that we remember stuff like that.

This is the title track, which is somewhat overshadowed by the presence of the hypervelocitous madhouse Lungs on the same recording. This tune is very “ECM”, in the same bag as Vashkar and Dansere: slow, with a long spacy intro, a beautiful tune, and spacy soloing over a vamp, or short form. The transcription starts at 4:40 in the recording: 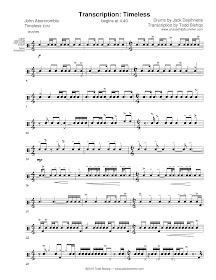 The entire tune is played over a three bar vamp, with two measures of 4/4 plus one measure of 6/4. Later in the tune there are some odd bars— Hammer shorts a few of the 6/4 measures, and adds a beat to one of them. It happens.

Dejohnette plays very softly for much of this, barely ever getting into anything I would call a mezzo forte; the written accents are mostly very subtle. You'll notice his hands don't move around a lot, partly because of that— swinging your arm around naturally creates too much volume when you're mostly playing a couple of inches off the drum. Dynamic situations like this are extremely common in modern playing, and complex, rebound-y, Moeller-y type technique is totally useless in them.