The Rhumba was a North American Latin style popularized in the 1930s by people like Xavier Cugat and Perez Prado, which has continued to hang around in the repertoire of jazz groups. There are also variants in New Orleans music and Country music. Don't confuse the Rhumba jazz combo rhythm with Rumba, the Cuban music— they're very different. Whatever it was in the 1930s, the Rhumba rhythm as it is performed today is not clave-based— the drummer, bass, or other rhythm instrument may emphasize a one-measure tresillo-type rhythm. New Orleans variants may use a Bo Diddley rhythm, which is the same as 3-2 Son Clave.

Through a lot of playing, here is what I settled on as a foundation groove. I don't believe I ever actually practiced it off the gig, and I think that's typical. Everyone seems to have his own way of doing it. Play this on the snare drum with snares off. Left hand plays rim clicks and muffles the head, right hand plays on the head near the edge. Lift your left hand on beat 4 to unmuffle the drum.

It's a corny groove, but you can have some fun with it. That can be played with sticks or brushes, or with a stick in the left hand and brush in the right, using the tom toms, and varying the rhythm, accents, articulations and timbre however you like. You don't have to play it extremely repetitively; listen and play what fits the music.

With the feet I do any of the following, depending on what else is going on musically: 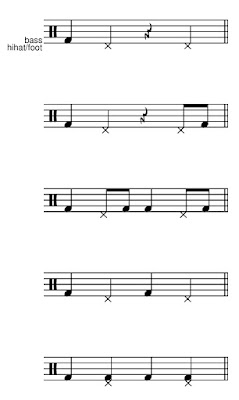 Some tunes I've had to play in this feel include Besame Mucho, Green Eyes, Spanish Eyes, I Just Called To Say I Love You, Tangerine... I've been trying to forget, actually. I know there are others. I often play Charade the way Johnny Hartman did— in 4/4 with a Rhumba on the A sections. Here's the basic thing Elvin Jones is doing on this recording, with a lot of variations— I'll have to do an actual transcription of this soon:

Philly Joe Jones often played this feel. This is from the Bill Evans album Everybody Digs Bill Evans: