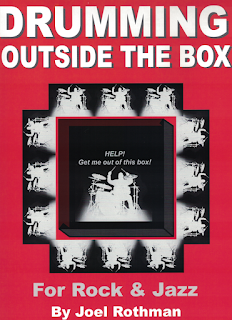 In the mail I just received a new book by Joel Rothman: Drumming Outside The Box - for Rock & Jazz. It's basically a library of patterns focused around creating an unbroken rhythm on the drumset, a la Bob Moses's non-independent method— an ECM-type feel. Also good for taking a jazz feel into a triplety, Afro 6-like feel. Or a Mike Clark or David Garibaldi type funk feel. Anything modern and quasi-linear.

The patterns are for two voices— nominally cymbal and snare drum, though you can play them with whatever limbs (or combinations of limbs) you want, adding feet, adding ostinatos— it's designed to be used creatively. Half the book deals with triplets in 4, 3, and 5; the other half covers 8th notes in the same meters, plus a few pages on 16th notes (I usually play 8th note exercises in 2/2, which is functionally the same thing— a four-note subdivision). The patterns usually don't have more than two notes in a row with a limb, so they're designed to be played fast and with minimal technique— a system I heartily approve of. Basically if you can play the first page, you can play the whole book; the focus is on gaining fluency. You're supposed to smoke through a lot of patterns working on this book.

40 pages. I don't see a price for it yet, but it's bound to be reasonably inexpensive. No reason not to grab it if you're working on this type of thing.

Get Drumming Outside The Box from Joel Rothman Publications

Get other Rothman titles from Amazon via the links below:
Todd Bishop at 9:31 AM
Share