Here are some Latin jazz grooves played by Joe Chambers on Caribbean Fire Dance, from Joe Henderson's album Mode For Joe. This is late phase hard bop. Chambers plays a solo on this that gets as loud as anything Art Blakey ever did— and he could play loud. That transcribed solo is coming later in the week.

I've written out the main A section groove, including the entire second A section from the tenor solo (starting at 1:00 in the track), so you can see how he varies it and moves it around the drums; then the B section groove, and a third groove Chambers starts at the end of the trumpet solo, and plays through the trombone solo. 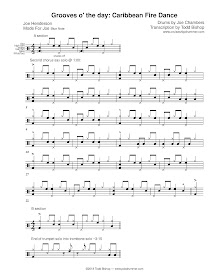 I noted some similarity of the first groove to Vernel Fournier's famous Poinciana groove, and the last groove is somewhat similar to a Mozambique rhythm, and I was curious about where Chambers picked them up, what his process was for developing them, and it occurred to me: he's still around— you can actually ask him about that if you want to know. So I found his email and wrote him a note about it— I don't know if he'll have the time or inclination to get back to me. But that never occurs to me. I always assume these guys are gods who don't inhabit the same plane of reality as me. And I've seen half the guys on this record play a bunch of times.

Play this with the snares off. There's generally a 2 feel happening, with the hihat is played on the 1 and 3 fairly consistently. There isn't a lot going on with the bass drum; he often accents the 1 strongly with it, and during the trumpet solo he goes into sort of a half time samba feel with it.