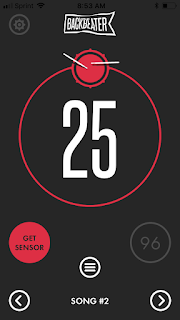 A rare product review here; this organization contacted me and asked me to try out and review their upcoming release, so here we go:

Backbeater is a product in development, with a Kickstarter launch coming up on August 14, created by a non-profit organization called Makers4good. It's advertised as the “World's Most Advanced Drum Metronome”; what it is is a snare drum-mounted sensor linked with an iPhone/Android app, which allows you to monitor your tempo and accuracy:

The Backbeater app runs analysis on the signal input from the sensor, to register a strike when you hit the drum. It has been designed to find the moment of greatest attack amidst the broad-band snare noise and lock on to the backbeat tempo. Hence the name! It then does crazy mathematics to make sure it gives you output you can use.

So, the name Backbeater is significant; it only does what it's supposed to when you're playing the 2 and 4— or any other evenly-spaced rhythm— on the snare drum.

It has a simple built-in metronome, and you can enter and save tempos (along with song titles, or any other label you want to give them). For some reason it only works between 20-220 bpm. If you play faster than that (like if you play a fill while you're practicing with it, or if you just play a faster tempo), it will read MAX. There are settings for sensitivity, metronome sound, “window” (2-5; how many drum hits the app uses to calculate your tempo), and “beat” (1-4; corrects the rate of drum hits so the display reflects the musical tempo you're playing). The package includes the sensor, a mounting bracket, and a headphone splitter. The sensor plugs into your smart phone or other device running their app; it attaches to your snare drum by means of a bracket which slides under a lug. There is also a hihat mounted phone holder than I didn't get to try out.

With the metronome running, the device is really an accuracy detector, not a tempo detector. Unless you're completely out to lunch, you're really always playing the metronome tempo; the number it gives you as “your tempo” is really an arbitrary (and misleading) indicator of the accuracy of your hits. Musical time doesn't work that way, with the tempo changing based on your note placement. The main value in metronome mode is in improving your consistency and accuracy by following the little red dot and trying to hit the drum when it tells you to. The app is actually trying to make you listen to the click a certain way, and place your backbeats a certain way, which I don't believe is strictly necessary for grooving, professional playing, but it could be a useful tool.

With the metronome turned off the device does actually measure your tempo, but using it is a little weird. Whether or not it's a useful for actually improving your time is unknown... at the very least it's a tool for testing yourself. The moving dot could be problematic in this mode: it moves at the tempo you established with your last 2-5 hits, and I can see minor fluctuations in tempo compounding as you follow the dot, leading to actual tempo fluctuation. Best to just ignore it, play your groove, and see how well you maintain the tempo through over time while playing fills and variations. This is made more difficult by a disorienting thing that happens in this mode: when you play a fill the app momentarily goes bananas— it will read MAX for a moment, then some other random tempos, while it tries to figure out what you did. If you keep playing your original tempo, after a few measures it calms down and shows the tempo you were originally playing— or something hopefully close to it if you sped up or slowed down.

In its present form, I think the app fulfills a few extremely narrow functions: aiding in accuracy of playing evenly-spaced rhythms played on the snare drum, and monitoring tempo based on evenly-spaced rhythms played on the snare drum. The non-metronome, tempo-monitoring function is more interesting to me, but the app spazzing out whenever I play anything other than 2 and 4 makes it somewhat less useful than it could be. I would need to this product to be a little more robust to give it a full recommendation, but it could be very useful to some teachers and players. Certainly Makers4good looks like a worthy organization, and if this product interests you at all, you should consider donating to their Kickstarter campaign, which once again is launching on August 14th.

They'll be sending me a production model of the sensor when it's available, and I'll continue using it, and post any changes in my feelings about it, and write about any updates to the app as they come out. It's potentially a useful tool, especially as (I assume) they continue to develop the app.

What would make it more useful to me

Ability to program rhythms. Either that, or include preset rhythms, from which the device can detect a tempo.

Ability to mount the sensor on a bass drum (I tried), hihat or ride cymbal (good luck with those latter two).
Todd Bishop at 5:12 PM
Share