Quite of flurry of POCs lately— a plague of POCs. I like this format. It's good for working on more complex independence; things too hard to do with a melodic line interpretation, which is my usual preferred way of practicing anything.

This page has the hihat played in the middle of the triplet*, and the bass drum where you might normally play a tom tom in a stock version of the groove, which gives this a generically African feel. This hihat placement may be a major challenge, so try this page as a warmup if necessary. The page based on David Cornejo's Afro-Peruvian groove also relates. Anyone is actually working on more than a few of these pages is going to be some kind of triplet/6-8/Afro-Cuban/waltz/Elvin groove badass. 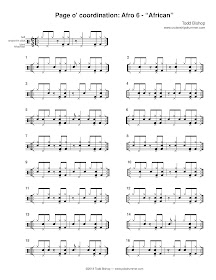 Learn all the patterns, and then drill them with any of my standard left hand moves you want. You can also do moves based on the sticking patterns in Stick Control. Try working it with this Eddie Palmieri practice loop.

* - We're in 6/8, so the triplet-sounding three note division of the beat is not actually a triplet (three notes played in the space of two notes of the same value), and readers with a musical education will object to me saying triplet. I'll write a whole post on this another time. For now suffice it to say that compound meters have a triplet feel, and triplet is an easier word than compound meter 8th notes for more readers to understand. I'm using convenient terminology that will be understood by my audience even if it's incorrect in the context of a theory discussion. Get off my back.
Todd Bishop at 8:50 AM
Share