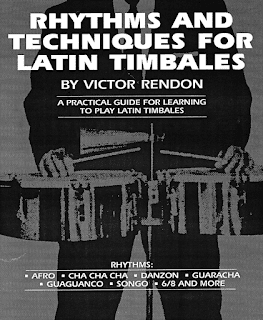 UPDATE: I just realized we've already shared another excellent free-online book by Rendon, Timbale Solo Transcriptions. Get that too, if you haven't.

Rhythms and Techniques for Latin Timbales by Victor Rendon is sort of the anti-Uribe book. You'll recall from my review that Ed Uribe's Latin book is huge, intimidating, and very demanding; Rendon's book is very approachable, concise bordering on terse, and is learnable in a reasonable amount of time. And timbales are the Latin percussion instrument most similar to the drum set, so all of this can book can be played on the drums by just choosing equivalent sounds, and adding a basic bass drum part.

It's mostly a style guide, showing some ways of playing each of the major Latin styles, including Mozambique, Guaguanco, 6/8 styles, Songo, and Cha Cha— the styles we've been most interested in on the blog. He discusses lead-ins— the abanico— and gives some contexts for practicing it, and fills. There are also longer sections on developing bell patterns, and left hand independence in 2/2 and in 6/8, each of which are several pages long. There are also several pages looking at the playing of Changuito, the timbalero for Los Van Van and inventor of the Songo rhythm.

A nice thing is that this is a free book— at least it's a pdf found multiple places on the internet, that is semi-ethical to download, since the book appears to be out of print and is not available to purchase. You can compensate Rendon for his work by buying his newer book, The Art of Playing Timbales, which is available at the Amazon links below.