Maybe if I transcribe a bunch of drum intros and post them on the blog, I can guilt trip myself into finishing my Book of Intros. It's still hanging around 95% ready to release. I've been blocked on the damn thing. So here's an intro and solo fours played by Frank Butler on a fairly obscure album by Elmo Hope— Elmo Hope with Jimmy Bond and Frank Butler. The tune is “B's A Plenty.” Butler was a West Coast guy, and a unique sounding player. Here he's playing in a sort of less technical, less slick Philly Joe Jones mode. 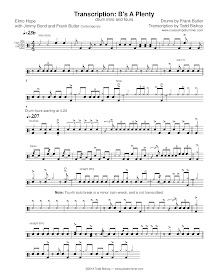 I've only written five of the six solo breaks; the fourth one is messed up. I could try to figure it out, but I frankly don't have the patience. History will have to be denied that one. Don't screw up your fours. Butler attempts to correct it by playing very clearly on the next break, but the other players don't catch it, and the beat is still turned around when Hope comes in with the head at the end of the last break. Butler is on it, and nails the figure even though he was backwards from the other players. Clearly he knows the tune really well even if his soloing was a little rough for a moment.

There are also some notable tempo issues on this track; Butler's intro is played at around 255, but the band immediately settles to around 230 a few measures into the head. By the middle of the piano solo the tempo is 210, then settles further to around 204 during the bass solo, then picks up a bit to around 207 for the drum fours. A 40 bpm drop from the intro to the body of the tune seems egregious, but if we express those tempos as half notes they would be 127, 115, 105, 102, and 103— a 20 bpm drop in that easier-felt tempo range. Still significant, but not unheard of. Obviously they should have started the tune around 210, or 105.