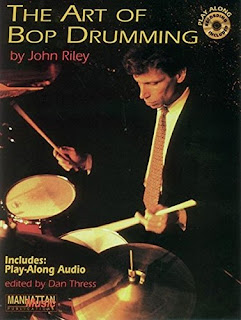 Anyone who follows this blog has certainly heard of John Riley— drummer and author of the book The Art of Bop Drumming, among other titles. He's a leading authority, and one of the most influential authors of drumming materials of the last 30 years, and I've learned a lot from his books; reading them and practicing out of them has influenced my own ideas about teaching, and writing.

This post is mostly about his book The Art of Bop Drumming— I have a habit of referring to books by the last name of the author. Since first seeing it in the early 90s I've had reservations about it— initially based on it being too good and later, too successful. I felt it gave away too much; it stated a lot of things we previously had to figure out by watching and listening and playing and talking to other drummers. Suddenly, to be aware of the hip way of doing things, all you had to was to buy the book that everyone else was buying. It's now a standard thing to get into that book if you're kinda serious about the drums, even if you have no other interest in jazz. It's become so successful, with such specific information, that I feel it must have some kind of homogenizing effect on the way drummers approach the music.

That's just the nature of creating and publishing information, and it's not a bad thing. You can't fault somebody for writing a great book, and for people buying it. Part of my philosophy in doing this blog is that it's better for the culture for people to have the info, and have the baseline be higher, even at the expense of slightly debasing the means by which people acquire the info. In the end, if we rabble of clueless people are slightly less clueless, the world is a slightly better place. Coming from a mediocre musical culture like white America, we have to take our improvement any way we can get it. None of what we do is about information anyway— you have to go well beyond simple information to do anything good.

Another broad criticism/reservation/funny feeling I've had about the book is that it's actually a style guide— a set of instructions for how to play correctly — and I don't think jazz should be treated as a style. It's not supposed to be about correct answers, and being too results-oriented about it feels wrong to me. What you're supposed to be doing with it is listening, playing, drawing your own conclusions and figuring out your own artistry. Even if many of your conclusions end up being the same as the ones in the book, the process is different.

Though a number of things in his books have inspired things I've written, there are a couple of basic reasons I don't use them much in my actual practicing:

1. The two-measure format he uses for comping/independence exercises doesn't work for me. The basic exercises are good for developing riff-consciousness, and thinking in two measure phrases is helpful for getting into clave-based music, but I prefer the long exercises found in Progressive Steps to Syncopation. I don't use the more advanced comping studies at all— you could copy them exactly and know a lot of hip comping shit, and it would be totally meaningless. It's a false process. Philosophically, I don't think jazz drumming should be about working out hip comping patterns from books.

2. His motive-based soloing method is effective, but I feel that it's too pat, and can end up sounding rather artificial— I've heard players like that. It's good to be aware of the broad concepts, and of some of the musical ideas, but I think it should be an instinctive thing, rather than fully worked-out.

To be clear, this is all just about my personal ideas and what I personally like to look at when I'm practicing. I think you should buy all of his books— TAOBD, Beyond Bop Drumming, and especially Jazz Drummer's Workshop. They are major entries in the literature of drumming, and the quality of the information is excellent. They're so good that you could easily mistake them for being a complete story on how to become an excellent jazz musician, and I don't believe that's true. Even the best books in the world are just addenda to the actual process.
Todd Bishop at 11:11 AM
Share