On the sage advice of a fifth grade student, I've revised this old page introducing the 3:2 polyrhythm, or hemiola. I've added a few variations and inversions, added stickings and syllables for counting... and deleted the whole triplet/compound meter portion— to be revisited in another post.

This has been such an important concept to me for so long that you'd think I would have a complete pitch for it worked out, but I don't. It's just a piece of African rhythmic DNA that is a fundamental source of natural complexity in any music using the drum set— and by complexity, I mean anything deeper than march rhythms and two-beats. I think of it not as a lick or an idea, but as a form of compound pulse that is constantly running whether anyone is playing it or not, which can be drawn from at any time.

Hence, you want to be really familiar with it in all its forms: with its unbroken, polymetric form (the first four lines of exercises), and with the various ways it fits into a single measure of 2 or 4 (the last two lines on page 1 and all of page 2). 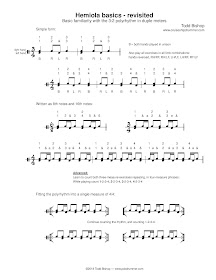 Play all of the exercises as written, with hands only, then play them with all combinations of limbs: RH/RF, RH/LF, LH/RF, LH/LF, RF/LF. Count out loud, two ways: count the exact rhythm, and count beats only. Repeat all exercises many times.