I spent about three hours yesterday listening to Kenny Garrett records, which is... he's great, the bands are great, the records are great, the tunes are actually great, I just... let me put it this way: I happen to like the drums. I like listening to them. I don't like listening to relentless unedited hyperactive spectacle. After a couple of hours of that you ask what am I listening to this for? What is the actual point? I don't feel that way listening to Garrett's records with Brian Blade on them. I don't feel that way when I listen to the famously-busy Jack Dejohnette playing on other people's records. So what are these other guys doing that is such a turn-off?

I needed an antidote— some normal music that doesn't just relentlessly bang away at you— and I put on this Junko Onishi record with Herlin Riley on it. It's Live at the Village Vanguard II, and it's got this tune on it called Ringo Oywake, with an Afro 6 feel. The transcription starts where the drums start playing time about 15 seconds in: 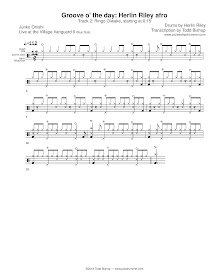 I should clarify, because there's so much internet confusion about meter: the type of groove is generically called (by me) an Afro 6. Depending on the context it could be notated and played in 6/8, 12/8, 3/4, 6/4, or as triplets in 4/4. Regardless of the meter of the context, it's still an Afro 6, or Afro 6/8, or Afro-Cuban feel— those are the usual things jazz musicians call it.

Riley plays a lot of variations while maintaining the same basic feel, and we need to see a few measures of it to get the gist of it. You'll notice that the main cymbal rhythm is the “long” bell rhythm, trending towards running triplets. The left hand part varies; part of the time he's playing Rumba clave. With his hihat foot he plays a closed note on beat 2 and an open sound on beat 4— that's the type of thing it's good to get used to playing with a nice, relaxed, deliberate heel-down motion. Learn the basic pattern, then add the left foot after you have it figured out.

Oh, there's probably something else going on with the bass drum than what I've written out. I forgot to finish that. You'll have to use your own ears to figure it out.