Transcription: James Gadson - Shout It Out

UPDATE: Text updated after I stupidly (but defensibly!) misidentified the drummer as Ndugu Leon Chancler. When you print out the pdf, scratch out Ndugu's name and put James Gadson.

Here's something great from James Gadson, playing on Patrice Rushen's Shout It Out, from 1977. I've mentioned before: if you try to play and sound like this people will like playing with you, and you won't sound like anybody else. This has a pretty classic 70s fusion/funk groove, with a displaced back beat and an open hihat on 4. 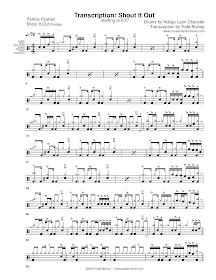 Gadson is playing a five piece drum set with two added concert toms. I transcribed up to the middle of the track, where he switches to the ride cymbal, because that's all I have time to do today. There are a few fairly wild fills on the out chorus; maybe I'll get around to writing out the rest of the tune another time. During the transcribed portion of the tune the fills generally are about building the groove; he plays them at an even volume and he lays them right on the 16th note pulse— you can hear a distinct difference between this and your average drummer's absent-minded 16th note fill.