This is pretty interesting: Buddy Rich playing a drum intro on eleven takes of the same tune: Leap Frog, released on The Complete Charlie Parker on Verve box set.  This is an actually an excerpt from from my much-promised, never-delivered Book of Intros, which has been languishing mere hours from completion for a couple of years now... I want to say three years... hey, you try saying something intelligent about ~100 drum intros by famous players and then commit it to print FOREVER, so all the other drummers and future generations and your mother can see it and pull your pants down and mock you for saying something stupid. Have you people ever heard of writer's block?

Please forgive that outburst. I'm hoping that posting this will encourage/force me to open the thing up and actually finish it this week. And listening to Buddy makes me a little tense. 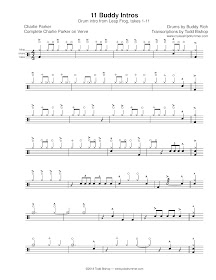 So, yeah: 11 takes of one tune. He plays different stuff every time, and gets increasingly rambunctious— it's easy to imagine he's losing patience, but who knows, he may just be having fun with other people screwing up. Whatever's going on, he's playing very aggressively. The quarter note pulse is extreme. There may be some rudimental sticking or other happening on the rolls; that's what happens when you play extremely fast on a floppy old drum— nobody can tell what you're doing. If you learn to play these, use whatever sticking works for you to get the effect.