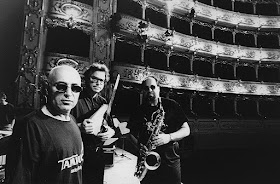 Here's one you're going to want to follow: Uncle Paul's Jazz Closet. The caretaker of  Paul Motian's recorded archives has made a podcast that includes selections from his recordings— released and unreleased, live performances, rehearsal tapes, other people playing his music, and miscellaneous items from his collection.

There's a lot of music here— they've been posting weekly since early 2016— but I'm most excited about the rehearsal tapes with Charles Brackeen and David Izenson, and with Bill Frisell and Joe Lovano, and the home recordings with Masabumi Kikuchi. There's seriously a ton of stuff. Go there now and download it all. There's also a blog connected with the podcast, and a book of Motian tunes available.
Todd Bishop at 7:34 AM
Share