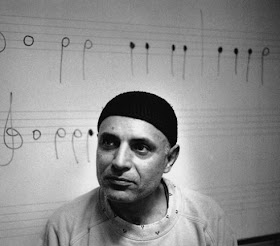 When I first started getting into him 25 years ago, I was a little bit perplexed by him; no drummers I knew were into him; he had a free jazz thing going on, but none of the free jazz writers I was into really talked about him; his drums sounded like they belonged to a rock drummer. And there was this primitive thing happening— there was virtually nothing about his playing that usually attracts drummers to listen to someone. No chops, no flash, virtually no Buddy Rich element.

The drummer Paul Motian (1931-2011, pronounced Mo-shun or Mote-ian) is best known for his musical relationships with Bill Evans, Keith Jarrett, and Paul Bley, and for his own bands, particularly his trio with Joe Lovano and Bill Frisell. I'm especially fond of Tethered Moon, his trio with Masabumi Kikuchi and Gary Peacock. Listening to him you hear his heavy sound, 50s bebop, 60s avant-garde, sometimes a little influence of 60s rock. He's also known as a composer. Much of what I describe here reflects his playing in the 70s and after, and to a lesser extent his playing with Bill Evans.

I should mention before we get too deep into this: what artists do is confound the definitive statements you try to make about them. I'm not a scholar, and my purpose here is not to write a definitive account of his playing; this is more an invitation to listen to him— until you recognize the things I'm talking about... and eventually, why stereotyped descriptions like this are inadequate.

Much of his playing is grounded in 50s bebop, which he plays with an often freight train-like delivery: very swinging, with a driving quarter note pulse, often with a strong hihat on 2 and 4, with the regular cymbal rhythm accented on 2 and 4... when he plays it. He gives you that impression even when he's not doing it. He once said Thelonious Monk suggested he accent the skip note, a la Elvin Jones, but I don't detect that in his playing. His comping is fairly simple, with a strong emphasis on quarter notes, and relatively little in the way of triplets— often not much in the way of independence at all. He gives the impression of playing gesturally, with the snare drum or bass drum (sometimes both) in unison with the cymbal. His playing with Bill Evans is lighter and more nuanced, but still rather rough, and interesting— not-so-correct, in his own words— and relatively less modern than what Evans and bandmate Scot LaFaro were playing. Certainly less virtuosic. Pianist Lennie Tristano once said to him “[Y]our fours sound like a drunk falling down a flight of stairs!”

The first thing you notice about his playing since the 60s is that he sometimes sounds like he doesn't know how to play. There's a primitivistic aspect to his playing, and he's perhaps the highest-profile drummer to make significant use of the free-time 60s avant-garde thing— playing in the manner of Sunny Murray, Milford Graves, Andrew Cyrille, and Rashied Ali. There is rarely (if ever) any kind of technical display happening, and he never seems to be playing for any kind of contrived effect. He does not use any kind of sophisticated rhythmic effect a la Elvin Jones, Roy Haynes, or Tony Williams and there doesn't seem to be any technical aspect to his playing obviously developed after the 1950s. He's obviously a big listener; we could call him a pure music player.

He uses a heavy ride cymbal (often the formidable Paiste 22" Sound Creation Dark Ride, and it's variants— he owned several) and often larger drums tuned moderately low, and which he generally plays for a full tone— he hits the drums. By full tone I mean often thunderous. He played a lot of rim shots, on the snare drum and on the toms.

This quote from from Chuck Braman's essential 1996 interview strikes me as definitive of who Motian is as a player:

It's just music, man. I'm not thinking about backbeat, rock, or whatever. I'm thinking music. There's a specific tempo that's stated in the very beginning, and that's already there. I don't have to force it on to everybody else and myself included. I don't have to enforce it. It's happening already. I don't have to do shit. I could have just stayed there and not played a fuckin' note. They're playing along, they're playing that speed, you know? And so, what I'm doing is trying to add some kind of music to that. I mean, whether the backbeat comes on the backbeat, or the frontbeat, or the sidebeat, or what-the-fuck-ever-beat! It don't matter, man, but it should be some kind of music there. It should satisfy me. Sometimes I wonder if it's a drag for the other musicians, what I'm doing, maybe I'm not as supportive of them as I should be. But fuck it, it's too bad then, you know what I mean?

He's generally a great example for drummers on how to be band leaders and recording artists; he selected great, very distinctive musicians, and stayed with them for a long time; he made albums based on easy to grasp concepts, with good cover art (the art was probably was not his doing, but it should be yours); as a composer he wrote distinctive tunes based on his own sensibility, despite (apparently) not having actual professional composer chops.

Here are some resources for listening and reading more about Paul Motian: