We lost a very great drummer this week, and one of a dwindling number of his generation: Ben Riley. He was best known for his playing with Thelonious Monk in the mid-60s, and with the group Sphere, which was comprised of former Monk sidemen; but he did a lot of other stuff, and stayed musically active for the rest of his life. He's a great example of bebop drumming in its classic form— maybe the best example I can think of. His playing is non-idiosyncratic, and he plays fairly busy, and very clean, with a great sound and an active intelligence. 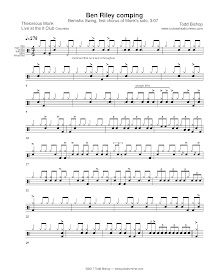 Swing the 8th notes, except where indicated. The hihat is played on 2 and 4 throughout, and there is some bass drum feathering occasionally audible. He mostly plays the standard cymbal rhythm, with occasional variations. The triplet figures played in measures 24 and 32 are played with an alternating sticking. A comping rhythm he comes back to several times is &-of-2/4, or &-of-2/&-4— see measures 2, 4, 6 and 8.