We probably did something similar to this way back in '12 or '13, when I was writing a lot of stuff on samba. My writing and my knowledge of the style has improved a lot since then, so I guess we're about due for an update. This is based on a drill I improvised in my own practicing.

Batucada is a form of samba, played in the street by often very large percussion ensembles, called baterias. It's different than how samba is typically played on the drumset in a US jazz setting, but it's good to have it inform your playing, and there are opportunities to use it. 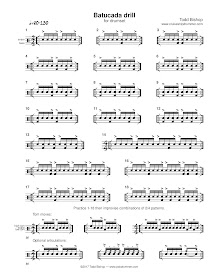 Practice exercises 1-18, then improvise combinations of the 2/4 patterns, thinking in two or four bar phrases, playing busier/more syncopated at the ends of phrases. See this post for some examples of how these longer phrases are constructed in Brazilian music. Learn exercises 1-18 with each of the tom moves, and experiment with the optional snare drum articulations.

See also my older pieces on feel in samba for tips on acquiring the particular kind of swing associated with this style of music. In most of the situations where you'll actually use this style, you'll play the rhythm a little straighter than is suggested by those posts, but that (and a lot of listening) will get you working in the right direction. It would be a great idea to spend at least part of your practice time playing with recordings.