This is one of the more fun-and-easy-and-cool-sounding short linear phrases from the Gary Chaffee pantheon: 5 notes (RLRLB) + 3 notes (RLB). Today I've written out some ways of playing it as a 32nd note lick in a funk or fusion context. I guess we're going a little “gospel chops” today, teaching you a canned lick— don't abuse it. 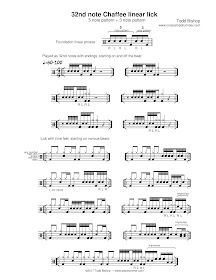 Play the cymbal part on any cymbal— on the version ending with the RL cymbal hits, catch the ride cymbal and the crash cymbal, or whatever you have on the right and left. Don't try to get both hands over to the hihats for that. Take some time to figure out some different possibilities for moving the actual lick around the drums. On some of the examples where the lick happens earlier in the measure, I've written in some simple fills to finish the measure— you should also improvise your own fills there, as I've indicated on the page.

Get the pdf
Todd Bishop at 5:53 PM No comments:
Share

This little series presents a kind of writing problem; it has to be either very short or very long, each of which will hit resistance with users. I've done it the long way, simply because it's the only way anyone may actually practice the thing. The first entry and today's entry are easy enough to figure out on the fly by following simple instructions, but they're good preparation for reading the later entries, so go ahead and read through them.

This is a very basic drumset orchestration for the 8th note sticking exercises found at the beginning of Stick Control, by George L. Stone. We're simply moving the right hand to a cymbal, and playing the bass drum in unison with it, and then doing a number of stock tom tom moves with the left hand. We'll also do them in a triplet rhythm. And practice any very similar exercises found in Stone— for example, today's starting pattern is RRLL; you should run the same steps with LLRR, RLLR, and LRRL. 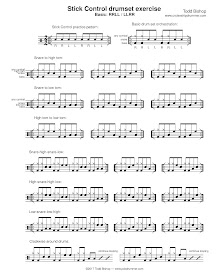 We've opted to be very thorough with the tom moves, covering all possible combinations, and it it will take quite of bit of time to get through all of them. Which is a good thing— tricking you into playing the basic pattern for longer than you would have is half the point. The patterns we're covering are very fundamental, and you want to be really good at them in a variety of rhythms, tempos, dynamics, and movements around the drums. Note that we're in 2/2— cut time— so each measure is two beats long, and we're playing a four-note subdivision— treat these exercises as you would 16th notes in 2/4. You can also play the 12/8 versions of the exercises (on page 2) as sixtuplets in 2/4.

I've only written out left hand moves, but you can also move your right hand between cymbals. Just improvise those moves as you play through the written exercises; if you try to be systematic about it you'll never finish this thing.

Get the pdf
Todd Bishop at 7:40 AM No comments:
Share

Two intros to a famous tune: Blues March, by Benny Golson. One is by Art Blakey, from the Jazz Messengers album Moanin', and the other is by Lex Humphries, from Art Farmer and Benny Golson album  Meet The Jazztet. 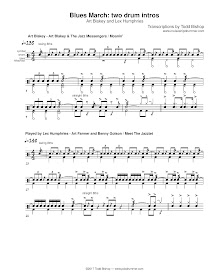 Swing the 8th notes on both intros, except the roll-off in the last two measures, which is played with straight 8ths. And of course the 16th note part of the Humphries intro does not swing. Rolls are all multiple-bounce— 16th note pulsation 5-stroke and 9-stroke for the short rolls, triplet pulsation 13-stroke for the longer rolls. Both drummers play their flams pretty flat; the grace note is so tight against the main note it's sometimes hard to tell if they are playing flams. It's noteworthy that on each recording when the band comes in the tempo slows down— to 130 on the Blakey version, and 140 on the Farmer/Golson version. Maybe that happens all the time; it never occurred to me to check that on other recordings.

Audio of the tracks is after the break.

Here's that practice loop for yesterday's Figure Control page in 6/4, sampled from Lilin, played by John Zorn's Masada. The tempo is a little easier than the other recent loop in 6.

You'll also find this useful for working on any harder triplet coordination materials you may be struggling with— I've been using it to walk through the triplet “harmonic” independence portion of Dahlgren & Fine, or the jazz independence portion of vol. 3 of Gary Chaffee's Patterns series. Just make the first three notes of the practice loop the rate of your 8th note triplet. That puts your quarter note at about 65 BPM.

Let's just assume every post begins with an apology for the light posting— I've just been very busy with playing, teaching, and getting ready for an art show this past few weeks.

This Funk Control/Figure Control/Whatever Control format I've been working with lately is proving to be quite a useful concept— taking interpretations commonly applied to Syncopation, and using them with a single rhythm, and then combining them. Today we've got another rhythm in 6/4, based on the bass vamp from Lilin, a tune played by John Zorn's Masada.

There will be a practice loop to use with this page forthcoming in the next couple of days. The tempo is more reasonable than that of the Free Design loop we used with the previous page in 6. 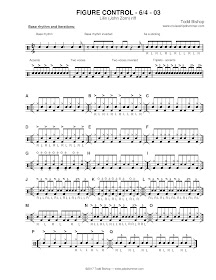 With each combination, play each component pattern one or two times, repeating the entire combination phrase many times:

With all of the pages in this series, there are so many exercises and combinations of exercises to learn, that if you really have a problem with any of them at a certain tempo, there's no problem with just cutting those exercises from your routine. Learning to play the exercises is just the first part of this system— what's more important is learning to combine whatever patterns you can play really well. There's no point in including a pattern you're really struggling with in practicing that part of the system. 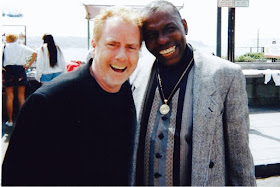 This is the type of thing I usually wouldn't bother writing out, the instructions are so simple, but the more advanced variations are challenging enough that you'll want to see them on paper. So let's start with the very basics. 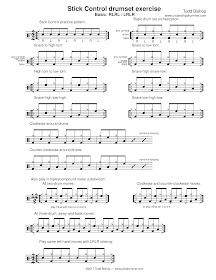 We're in 2/2, so we'll be playing a four note subdivision— functionally “16th notes.” You could count the rhythms 1e&a 2e&a if you wanted. Set your metronome to half note = 60 or faster. For the 12/8 version, set your metronome to dotted quarter note = 60 or faster. Play the RLRL exercises which I've written out, then apply the same orchestration/moves to the LRLR sticking.

Learn this straightforward template well; we'll be applying it to a few other Stick Control exercises, and maybe some related things not found in that book.

Get the pdf
Todd Bishop at 7:40 AM No comments:
Share 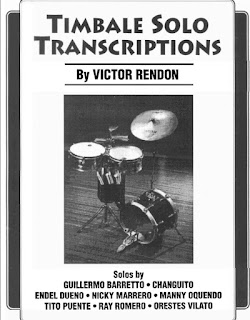 Get the pdf
Todd Bishop at 10:00 AM No comments:
Share
‹
›
Home
View web version