We should make a series out of this: “little known records where you can learn more about a drummer than from his really famous ones.” Something like that. This 70s album by Chet Baker gives you a chance to really check out Steve Gadd's jazz playing. You've heard him kill it with Chick Corea on albums like The Mad Hatter and Three Quartets, but maybe you could use an easier entry into what he's really doing. On this record the tempos are a little slower, the tunes are standards, and the drums are mixed right up front. Gadd tends to be thought of as a studio/fusion/R&B player, but he's also a great, very influential jazz drummer. There are a lot of elements to his playing that have become stylistic features of post-60s jazz drumming— his playing embodies some classic elements of newer playing the way Art Blakey or Philly Joe Jones did 50s playing.

The album is She Was Too Good To Me by Chet Baker, released in 1974. The tune is Autumn Leaves, from which I've transcribed Gadd's drumming during the two choruses of Bob James's Fender Rhodes solo. Autumn Leaves is 32 bars long with an AABC form, but in this arrangement by Don Sebesky, the C section is 6 bars long plus an 8-bar tag— 14 measures. It sounds weird, but the tag just begins on the last note of the tune. They play the elongated form every time— on the head and on every chorus of the solos (sometimes arranged tags are played on the head only, or on the last chorus of solos only). 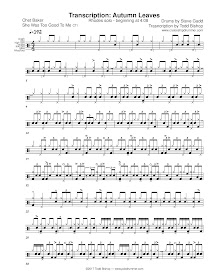 What he does owes a lot to Elvin Jones, simplified and polished, emphasizing Gadd's own deep groove. The cymbal interpretation is similar, and Gadd plays a lot of triplets in three and four way coordination. I hear a lot of Roy Haynes in Gadd's big syncopated accents on the cymbal and bass drum or cymbal and snare. Certainly there's a Tony Williams influence, but it's less obvious to me— certainly in the use of larger toms and bass drum.

The drum sound is different from a typical jazz sound through the 60s, and in the 90s and later; it's punchier, with more bottom. The tom toms are larger, with Black Dot heads tuned low, maybe with the bottom heads removed. The snare drum is tuned lower than normal for jazz, with a fat, muffled sound. Basically a straight studio pop sound for the time.

An interesting thing I'm noting on the second chorus especially is some feathering of the bass drum, mainly on the 2 and 4. There also seems to be a fair amount of playing both feet in unison. Interesting avenues for exploration if, like me, you want to add some bottom but you don't want to be playing quarter notes on the bass drum all night. The feathered bass drum is not in the transcription— everything I've included is a full, audible note.