In honor of the passing of the guitarist John Abercrombie— along with Pat Metheny, John Scofield, and Bill Frisell, one of the most important guitarists of the last ~45 years— here's Jack Dejohnette's playing on the opening of Backwoods Song, from the first Gateway album. Gateway was Abercrombie's trio with Dejohnette and Dave Holland. Every serious drummer needs to own all four of their records: Gateway, Gateway II, Homecoming, In The Moment.

I've transcribed the intro and head of the tune, up to the beginning of the guitar solo— probably I'll write out more of the track for a future Dejohnette transcription e-book. 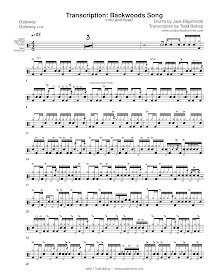 There's a lot of stuff on the page, but this is pretty straightforward and playable. Play rolls, ruffs, and drags open— as 32nd note doubles. Where I've notated 32nd notes, play an alternating sticking. There are also a number of closed buzz-strokes, indicated with the z articulation. It's interesting where he plays the hihat with his foot— often when it's played sporadically like this, it seems to be happening by accident; the player is moving his foot the whole time, and occasionally some notes sound. Here Dejohnette mostly plays it during fills, not so much during the regular time feel— it's interesting to me because it suggests deliberation. I don't know if that observation will mean anything to anyone else.