This is something inspired by Joey Baron's playing on Bill Frisell's Child At Heart— I always come back to the same few things, and that's a particularly fertile, mainly simple, piece of drumming. Some of what he does sounds like it's derived from another meter, which leads us to what we're doing today: playing a rock beat in 5/8 in 4/4.

I'll state up front that the “metric modulation” thing currently fascinating the internet is not what we're about here. This is more about bringing a way of phrasing into your rock playing which you would not arrive at just thinking in straight 4/4. 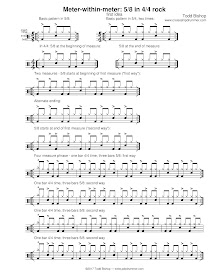 On the page we have the basic idea in 5/8; then played twice metered in 5/4; then in 4/4 several one, two, three-measure (with an extra measure of 4/4 time at the beginning), and four-measure practice phrases, with the 5/8 pattern starting on 1, and with the 5/8 pattern on the end of the measure— the last five 8th notes of the measure. The accents are mainly for the hihat, but you can also accent the bass drum— notice that the first note of the 5/8 pattern is accented, and the last is not. It's not a terrible idea to count out loud in 4, especially on the longer practice phrases.

Practice the phrases, run them with the Child At Heart practice loop, and let this idea come into your actual playing in an organic way. You should at least hear some new phrasing possibilities even if you don't want to do this thing exactly.