Very occasional quote of the day: Motian on time 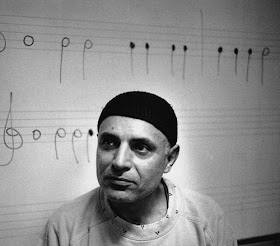 “I believe that 'time' is always there. I don't mean a particular pulse, but the time itself. It's all there somehow like a huge sign that's up there and it says time. It's there and you can play all around it.”


This reminded me of one of the first things I shared on the blog, from Chuck Braman's invaluable 1996 interview with Motian:

“There's a specific tempo that's stated in the very beginning, and that's already there. I don't have to force it on to everybody else and myself included. I don't have to enforce it. It's happening already. I don't have to do shit. I could have just stayed there and not played a fuckin' note. They're playing along, they're playing that speed, you know? And so, what I'm doing is trying to add some kind of music to that.”
Todd Bishop at 9:57 AM
Share