This is how it goes around here, I get into a certain thing and do only that, and the blog content becomes unbalanced. What do I care, I love Ndugu Leon Chancler's playing. You can take these transcriptions as follow up on the Playing Funk Effectively post— they illustrate some of the things I was talking about there.

This is a short transcription that is mostly groove, plus a few very cool fills, so we'll call it a “Groove o' The Day ENHANCED”, like that's a thing. It's the intro from a tune called Haw Right Now, from Patrice Rushen's Prelusion album. There are a bunch of great LA players on this record. 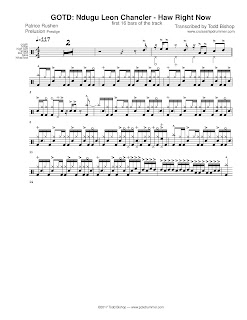 Chancler does a number of hip things here: the opening fill, the crash on the & of 4 in the middle, the audaciously long fill at the end. All a little unusual in small ways, revealing of the player's intelligence, and COOL-SOUNDING.

I don't know what's going on at the beginning of that ending fill— it looks like it needs to lead with the left, but the last four beats seem to be a mixed sticking with the right hand on the toms, left hand on snare drum. The specifics aren't real important.