This is the first in a series of thumbnail introductions to some important players. Like everything on the blog, this is my personal perspective— there's no pretense that these are complete historical sketches, or a complete style analyses; they'll just be little verbal introductions for drummers wanting to learn more about these players' work.

And I should clarify right up front that your entire job is to listen to the recordings, enjoy them, and learn something about musicianship from them. No verbal explanation has any meaning, and there is no understanding, without a whole lot of listening. 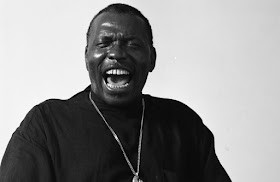 Elvin Jones (1927-2004), you might have gathered, is a very special player. Today basically every jazz drummer with any aspirations to modernity develops a very close personal relationship to his playing, and learns some approximation of his “thing.” His way of playing has become an actual style— I've been asked to play an “Elvin-like” feel many times, and have played many tunes on which it was obviously the intended style... which is not to suggest that he's merely a stylist who can ever be fully imitated.

On first impression his playing is deeply swinging, emotional, organic, rolling— and also impenetrable— it can be hard to tell what's going on, and it often takes students awhile to figure out why he's so great. Once you do figure it out, he may be the only player who sounds like he's doing anything— it's very common for students to be into Elvin and no one else— for a time, at least. His playing is so deep it suggests a connection to ancient things, to African drumming, to some old form of swing, but he is an American phenomenon, extremely modern, and a unique artist.

Elvin is also a jazz drummer, and what he plays can't be fully understood without understanding that context: jazz tunes, standards, and circa-50s-70s modern/avant-garde jazz forms. In fact this is one reason to get into jazz— so you can understand the greatest artists on your instrument.

He is one of the most recorded and most influential jazz musicians in history, and he played in one of the greatest and most influential bands in history, the John Coltrane Quartet. He's extremely important to the evolution of the instrument as the first truly multi-directional drummer— he improvises with all four limbs in an integrated way. The major triplety, linear methods of practicing are really derived from his playing. The stereotype of his playing is that it is all triplets, but he uses a lot of 16th notes as well. Much of the “organic” quality of his playing is created by the way he combines triplet and 16th note rhythms— sometimes within the same beat— as well as his very legato phrasing and articulation.

He had a unique way of playing the jazz cymbal rhythm, which is now widely copied. Where other drummers would accent the 2 and 4, or accent the quarter notes, Elvin typically accents the “skip” note:

And de-emphasizes the note after it, sometimes to the point of eliminating it:

He was one of the great players of the jazz waltz, even when playing in 4/4— he has a polyrhythm built into his playing, with an omnipresent 3/4 and 6/8 cross rhythm. This is encouraged by his cymbal interpretation, which flows easily into a dotted-quarter note emphasized rhythm:

His playing in general is marked by that rolling feel, dramatic dynamics, adventurous rhythm, and aggressive accompaniment. Elvin's comping is it times is so forward it almost puts him in a co-soloist role. But hearing him only on the famous records it's easy to overestimate his aggressiveness (and volume)— on seeing him play in person I was actually surprised to see him play straight time quietly with brushes during a piano solo; his real playing confounds the stereotypes it is so easy to form about him.

His drums are a little different-sounding to non-jazz drummers; the snare is tuned high, and sounds crisp, aggressive and metallic. The toms and bass drum are tuned as an ensemble, high (especially the bass drum) and wide open. His cymbals are generally large (remembering that in the 40s and 50s a 20" cymbal was considered large), thin, and dark. That sound is standard for jazz drummers now, and was not uncommon in the 50s, but Elvin's playing in the 60s was one of the things that fixed it as the jazz sound. At the very least, from the 40s to the 60s there was a general trend from smaller to larger, darker cymbals, and Elvin's popularity was certainly a major factor in that.

These things don't work in neat progressions, but Art Blakey and Max Roach seem to be Elvin's closest musical “ancestors.” They were only 8 and 3 years older than him, respectively, but Elvin's career didn't take off until 10-15 years after they were well known. In the 60s and after, Roy Haynes's playing seems very connected to Elvin, but I don't hear a particular influence either way in Roy's playing in the 50s. Elvin was born two years after Roy, but again, his career didn't take off until later.