Here's the drum solo from the same tune as our GOTD the other day: Afrique, from The Witch Doctor, by Art Blakey & The Jazz Messengers. Blakey's solos with his group often serve a compositional function, and also a show function. They're not just about look how well I can play, or here's me playing these changes. There's also nothing contemplative about this solo— it's all about power and rising intensity. The volume is uniformly very loud all the way through— basically every note is accented. The housetop accents are rim shots, and extra strong. 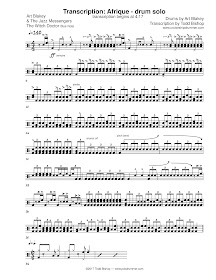 The solo is 32 bars long, with four 8-bar sections. The first and third sections are cleanly composed of 2-bar phrases; the second and fourth sections are each more an undifferentiated wall of triplets. His phrasing is interesting to me, changes are marked more by doing something new in the first measure of the phrase than by building or changing in the last measure of a phrase, or by placing an accent on 1— I don't know why that seems surprising to me. He plays bigger on measure 17, the first measure of the bridge, for example.

I would take those moving triplet passages as an invitation to experiment and figure out a similar thing that works for you. You can hear there's quite a roar happening, and I may not be getting every single note he played. Figure out your own version of whatever showy crossover thing he's doing. It's less likely to be some kind of mixed sticking with singles and doubles.

Note the pitch bends that happen in the middle— play these by turning the snares off and pressing into the head with one stick, or your elbow— Han Bennink uses the heel of his foot. It probably helps to use calf heads and to not cranking your drum too high.

Heading back into the Afro vamp at the end of the solo, it's easier to notate the transition by putting it in 6/8— as a “groove o' the day” I put it in 3/4, since on the vamp the other instruments are playing strongly in 3.