Here's a nice record I would've have liked to have known about 30 years ago, on which Charles Lloyd is rocking a Jimmy Giuffre kind of vibe. It's Of Course, Of Course, and it was recorded in 1965, with Tony Williams on drums and Ron Carter on bass. Tony is playing all the stuff he plays on the Miles Philharmonic records, but toned down, slowed down, and with better audio, so we get a real clean listen to his stuff.

Here I've transcribed some of the comping from The Best Thing For You, on the sections where the bass is walking— on the intro, and the second chorus of Lloyd's solo, at 1:30 in the track: 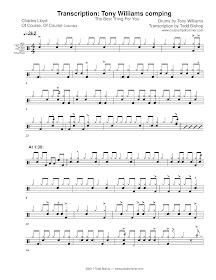 The second excerpt starts on the last measure of form, so we can get the tom fill, and it ends before the end of the form as Tony starts transitioning into the guitar solo. In case you're wondering about the general absence of hihat: he's not playing it. I imagine there's some kind of left foot motion happening, but, except for a few spots, it's not making any sound that registers on the recording. About the dynamics in the transcription: the notes in parenthesis are all played very soft, and the housetop accents are all played very strong; the difference between regular unaccented notes and accented notes may be more subtle.