This is one of the cooler things in drumming to come out of the late 70s— Terry Bozzio's fills on Frank Zappa's Dancin' Fool, from the album Sheik Yerbouti. I must've listened to this 500 times when I was in the 9th grade. I've written out the little opening instrumental thing, the same break when it happens in the middle of the song, and also the drums on the “yowza” interlude before the last chorus: 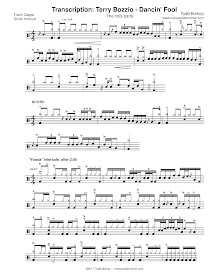 I've notated this for five tom toms; I think he has at least six— he's playing his Rototom set here. The fills don't look very pretty on the page, but they should all work. As he moves around the drums, he seems to often have his right hand on a lower tom and his left on a higher one. Do whatever you have to to make them playable. It sounds like he might be using two bass drums to do those doubles at the beginning of the yowza section— you can easily do them with one. I did a Reed interpretation awhile back that happened to develop that exact lick.

Bozzio had one of the great hihat sounds in rock & roll on this record— he played them half-open much of the time, and when he hit big accents on them, they had a really obnoxious, piercing thing happening which really puts a lot of energy into the music. I think they must have been Paiste 602 Extra Heavy, or Heavy, or maybe Sound Creation., probably 15"?