Just a quick little Roy Haynes transcription, from Bad News Blues, from Haynes's album Cracklin'. It's short— they play the 12-bar head once before heading into the bass solo— but there are some things to be learned about playing a blues in a modern way here. 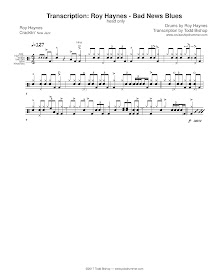 From the drummer's perspective, the tune is basically a two-measure riff played six times over blues chords (it's actually four measures long melodically, but the repeating rhythmic figure is two measures) :

Roy hits the 1 and 4 the first four times, than catches the accents on the & of 4/& of 1 the last two times— on the turnaround, the last four measures of the form. Listen to it a few times through, first focusing on how the drums interact with the horn notes on 2/3, and then focusing on the interaction with the horn accents on the &s. Mostly what you'll notice is that he doesn't accent in unison with the horn until the end of the tune. You can do with that information what you will— file it away for future reference.