I've said before, I practice out of Haskell Harr's Drum Method a lot. It's the stodgiest traditional rudimental snare drum book available this side of the Moeller book, but it uses accurate modern notation— many books of its era do not. It's a part of the drumming literature many, many great drummers have played through at one time or another— like Elvin Jones and Terry Bozzio— and most importantly, it really conditions my hands for real-world playing— better than any other book I've encountered. I don't know why— I don't use a whole lot of rudiments in my actual playing.

To continue: I also play out of Mitchell Peters's Odd Meter Rudimental Studies, which contains a number of fairly traditional but sophisticated pieces in a very Harr-like vein. It seems like a natural enough things to adapt the actual Harr etudes into odd meters, too. So here's the first major study in book 2 of Haskell Harr's method, a flamadiddle study, transcribed into 5/8: 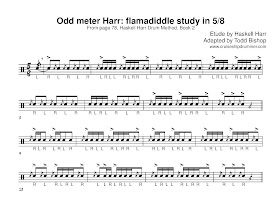 It's an easy piece, with a nice little waltz-like lilt to it. Standard tempo for pieces like this is around quarter note = 100-120; you'll want to push it up to around 130. Harr makes a practice of defining his rolls— the little numeral 7 at the beginning indicates that it's a 7-stroke roll. You'll play that with a 16th note triplet pulsation. More of these coming!