Happy holidays everyone. Instead of finishing the other transcriptions I said I needed to finish, I started a new, really long one: Ndugu Leon Chancler playing Earth, from Joe Henderson's album The Elements. I don't have a lot of records with him, but Chancler is one of my favorite drummers in the world— I actually decided that based on his playing on one George Duke record.

This is how you're actually supposed to play funk. It's not loud, there's a strong pulse, the architecture of the rhythm is very defined, he's obviously very alert to what's going on around him— and there's some subtlety to his touch, dynamics, and sound. He's not playing for perfect evenness of volume, or for digital sample-like consistency in the sounds he's drawing from the instrument. Obviously that wasn't a thing yet in 1974, but it's very much a thing now, in certain sectors, to the detriment of people's musicality. I think. In writing this blog I listen to a lot of 70s funk and studio drummers, and there's always way more subtlety than I expect. These guys are listening, and are very attentive to the arc of the melody and the ebb and flow of the groove. 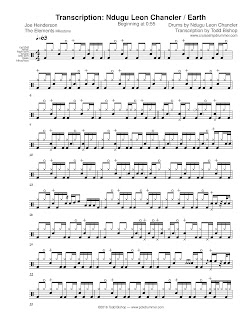 Except for notes in parentheses, everything is at a fairly even volume. I've indicated a few accents, but they're not huge. Housetop accents indicate a rim shot.

I haven't differentiated between cymbals— clearly there's a crash, ride, and swish cymbal. But he doesn't play them strongly, even on the accents, so you can just catch whatever's easiest. He does play the bell of the ride cymbal at one point, which I've indicated. I believe he's using three tom toms.

Things start to get really interesting on page 4— read the rhythms carefully there. I don't know what's up with the measure of 5/4 on the last page. Ndugu went an extra beat in his fill for reason, and everyone was with him.