I was rooting through some early George Benson the other day, and turned up this smoking number, which I had never heard before: Hallelujah Time, played by Brother Jack McDuff, with his long time drummer Joe Dukes killing it. He's actually doing a lot of things I like playing on fast tempos these days, so I wrote it out— just his playing on Red Holloway's tenor solo. The audio is not great, so there are likely some things going on that didn't make it to the page. No matter, the only things that really concern me here are the time and the big accents. 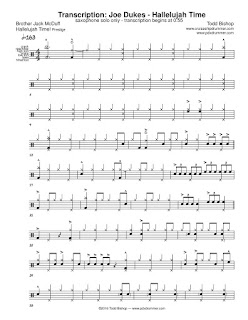 Some notable features of his playing here: Likes starting a chorus with accents on 1 and 4. Big, simple punctuations, often on 1, 4, 1 and 2, or 1 and 3. One-measure fills at the end of phrases. Mostly straight quarter notes in the cymbal pattern, sometimes plays several measures with the skip note added only on 2. Rim click on 4 frequently, or light 2 and 4 on the snare drum— ghosted, really. Relentless, driving hihat on 2 and 4 all the way through. Little conventional bebop independent-style comping on the snare drum, and not until later in the solo. Overall, very half note and quarter note oriented.

The transcription begins at 0:55 on the track. The tempo is around half note = 163— cooking, but not insanely fast.

After the break there are a couple of more versions of this tune.